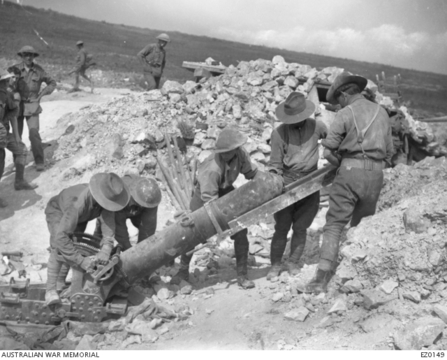 Unit designation of artillery units in the AIF was confusing; none more so than the Mortar Batteries.  The Mediums and Heavies were formed into batteries of four (heavy) and six (medium) mortars attached to each division.   They were initially designated "V,X,Y,Z/n” where ‘n’ was the Division Number. From February 1918 they were reorganised and moved from Divisional to Corps Troops. The 3rd Division Medium and Heavy Trench Mortar Batteries were:

At the start of the First World War, the Trench Mortar did not exist in the British Army.  The Germans had them, where they were known as Minenwerfers, but certainly not in great numbers. They were still few in number in 1914/15.  Very few were available at Gallipoli, where they and howitzers were highly valued in order to overcome 'terrain masking' whereby intervening terrain features impeded flatter trajectory field and naval guns;  mortars and howitzers with their high angle fire  (greater than 45 degrees) can reach over and behind intervening ridges and hills with deadly effect.

On the Western Front, weight of shell was imperative for overcoming enemy defensive positions, so medium and heavy artillery of all kinds became crucially important.

As the Battle of the Somme ended in November 1916, the British and Empire Armies started rebuilding for the campaigns of 1917. Improved propellants for the 3 and 4-inch Stokes and a new medium mortar were introduced. In the autumn of 1916 a Major Newton developed the use of extra charge rings that slipped over the rear of the bombs that enabled the range of the 3-inch Stokes mortar to be extended to 677 metres. Further improvements in the charge rings saw the range extend to 754 metres and by the beginning of 1918 the 3-inch Stokes to 1,143 metres. This was the maximum range that could be obtained using the cylindrical bomb due to its poor drag coefficient and the mortar barrel having a maximum chamber pressure of two tons per square inch.

Major Newton had also developed a new medium mortar that used the same firing system as the Stokes mortar. This became the 6-inch Trench Howitzer Mark I, commonly known as the ‘Newton’ or ‘Stokes-Newton’. The design was successful with 1,700 being ordered in late January 1917. Deliveries began in May, and in June the ammunition started arriving in France. In 1917 1,929 Newton mortars were produced with a further 609 in 1918 with ammunition production 239,471 and 1,134,805 rounds respectively.