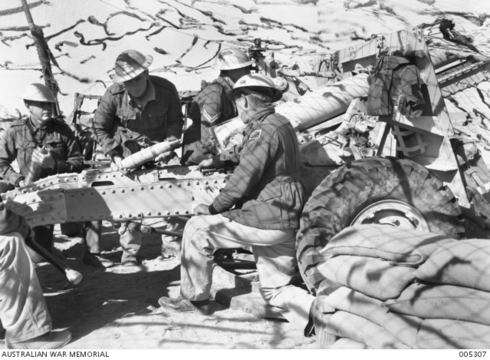 The 2nd/1st Field Regiment was a field artillery regiment raised for service during the Second World War.  It was raised as part of the 6th Division, in October 1939 for intended service as part of British forces in the Middle East, largely from NSW volunteers for the 2nd AIF.

Shortly after arrival in the Middle East, the Regiment was briefly re-roled as an anti-aircraft regiment.

At Helwan, in September 1940, the regiment was re-roled once again as a field regiment, and re-equipped. Like all AIF Field Regiments, it was equipped with the superb 25 pounder gun/howitzer, the best in its class in WW2.

In January 1941, the Australians went into action for the first time, against the Italians attacking Bardia. The 2nd/1st Field Regiment supported the 16th Brigade at this time, before being re-assigned in support of the 19th Brigade's advance towards Tobruk. The regiment's headquarters then assumed control of a number of Australian and British artillery units as they pushed towards Derna, Barce and then Benghazi, achieving remarkable successes in quick succession.

Following this, the Regiment, less its 2 Bty, deployed to Greece as part of ‘Operation Lustre’.  The ill-starred Greek campaign was already in the withdrawal phase by the time the Regiment arrived, and it supported the 16th Brigade in several rear-guard actions as they withdrew from Domokos towards the port of Kalamata.  Kalamata became a focus of Allied evacuation efforts.  All of the Regiment's personnel were extracted but they lost most of its guns.

The outbreak of the Pacific War saw the Australian Government press for the return of Australian forces to defend Australia.

On the way home elements of the 1st Division were diverted to Ceylon in mid-1942 to defend against a feared invasion there,  where they provided a defensive garrison before returning to Australian in July 1942.

The Regiment was hastily re-deployed to New Guinea in August 1942, supporting the 16th Brigade which had been rushed to support the Militia conducting a delaying defence the Japanese advance along the Kokoda Track.

The Regiment, initially unable to deploy on the track itself because of the terrain, was assigned to the defence of Port Moresby during the fighting along the Kokoda Track, before taking part in the Battle of Buna–Gona and the defence of Wau, remaining in New Guinea on garrison duties until August 1943.

Withdrawn to Australia, a long period of training followed before the regiment took part in its final campaign of the war on the north coast of New Guinea in the Aitape–Wewak campaign in 1945.

At war's end a massive program of demobilisation was commenced and the Regiment began to fragment as priority drafts of personnel were despatched.  In early January 1946, its guns were embarked and the HQ closed ahead of disbandment back in Australia.