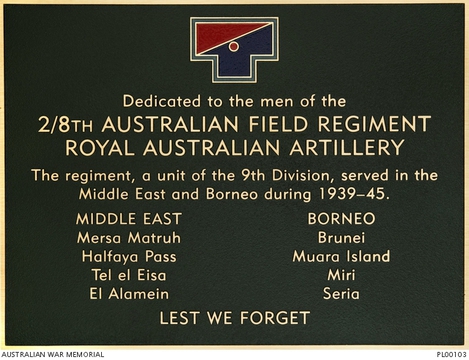 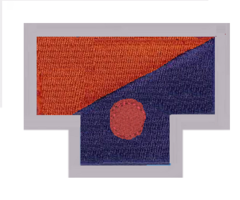 Formed in Australia during the first year of the Second World War, the 2/8th Field Regiment served in Egypt and Syria, in the Middle East, and on Borneo, in the Pacific. It was one of the 9th Division's three field regiments and it fought as part of the "famous division" at El Alamein and Brunei Bay.

Throughout 1940, as the size of the Second Australian Imperial Force (AIF) increased from one to four infantry divisions, new artillery units were also continuously raised -15 field regiments were raised by the end of the year. Among these were the 9th Division's 2/7th, 2/8th, and 2/12th Field Regiments.

Men for the 2/8th initially came from Australia's eastern states. The regiment's 15th Battery was raised at the start of May 1940 and the 16th Battery was raised two weeks later. In October 1941, while the regiment was in the Middle East, artillery units were reorganised and a new battery, the 58th Battery, was formed.

The regiment did its initial training using 18-pounder guns and 4.5-inch howitzers. In the middle of November the regiment left Australia for the Middle East and arrived in Egypt in the middle of December, before moving to Palestine. Southern Palestine was being used as a base for the Australians, where they could complete their training, and the 2/8th went into camp at Kilo 89.