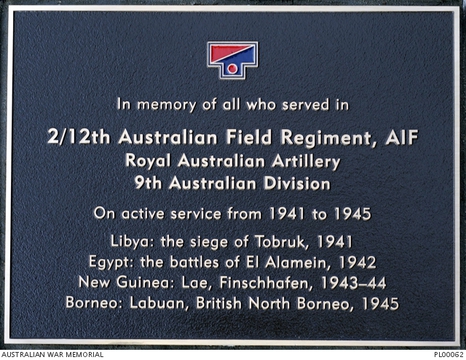 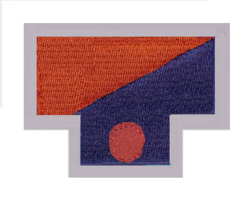 Formed in Victoria in 1940 as the 2nd/2nd Medium Regiment it was converted to the 2nd/12th Field Regiment prior to embarkation overseas in November 1940.

The 2nd/2nd Medium Regiment trained to use 60 pound guns, however, due to shortage of these weapons available for both training and active combat the decision was made to covert both medium regiments into normal field artillery regiments which used the modest 18 and 25 pound guns. The conversion occurred in October 1940 and as part of the process the regiment was renamed the 2nd/12th Field Regiment to fall in line with the other field artillery regiments using the 18 and 25 pound guns. Before embarking overseas the regiment borrowed several 18 pound guns for some brief training, but before they knew it they were sailing overseas to Egypt where they would join the newly created 9th Division.

From here, the 2nd/12th would go on to have one of the most distinguished service careers of any Field Regiment during World War Two. Serving during the Western Desert campaign, the 2nd/12th operated during Siege of Tobruk and the First and Second Battles of El Alamein. During the Siege of Tobruk, the regiment upon just having arrived didn't have any artillery pieces and so for the most part used captured Italian field guns (see main image). It is also unofficially stated that the regiment not only spent the most days in action, but also fired more shells than any other Field Regiment present at the time.