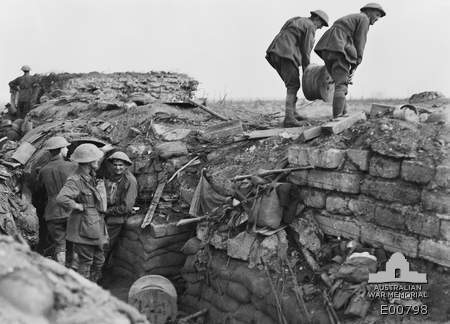 This designation was to identify reinforcement drafts  of personnel identified for service in one of the 5 Divisional Signals Companies attached to each Division.  Soldiers in these drafts would be allocated to a specific Divisional Company after processing in one of the personnel depots in the UK or France.

If a soldier is thus identified you will likely need to interrogate his service record to get specific details of his subsequent service.

The Division Signals Company was tasked with providing communications from the Headquarters to those of subordinate formations. In the case of 1 Division for example, this meant the 1st (NSW) 2nd (Vic) and 3rd (outer states) Brigades and Division units (Artillery, Engineers, Pioneers, MG Battalions and Services etc).

This could be by a combination of electronic and physical means.  In the latter case, homing pigeons and motorcycle or horsemen working as despatch riders;  in the Middle East they also used heliographs which employed angled mirrors to send non-electronic Morse Code signals to one another.  Heliographs were rarely used in Europe because sunshine was not reliable enough!  At the front line at unit level, soldiers designated as 'runners' would carry orders messages etc at great risk to themselves. On Gallipoli, horses were also used for this high risk task.

By far the most important means though, was the field telephone. This entailed the provision of thousands of handsets, hundreds of thousands of metres of two-strand wire cable and hundreds of switchboards.  Radio was in its infancy and only appeared late in the war at high level headquarters.

The advantage of a line telephone network was it meant users could use voice rather than Morse code which was tedious and slow.  The disadvantages included the vulnerability of the network to disruption, and the less likely occurrence of it being 'tapped' and listened into by the enemy.

To create the network, telephone line had to be laid all over the landscape.  Line was buried where possible but it would often be cut or broken by artillery fire. Then it would have to be surface laid to maintain communications. Laying line was one of the most hazardous jobs in the front line. The "Linies" had to move above ground carrying a reel of wire. They could often be the only moving thing on the battlefield and thus attracted fire - both small arms and even artillery fire. Hence the task was often performed at night, with the added risk of getting disorientated on the battlefield. The "linies" also had the unenviable task of locating and repairing breaks in the line.