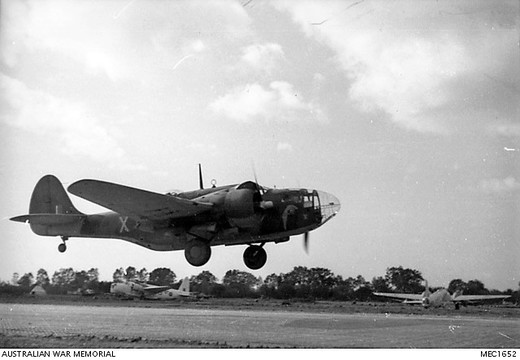 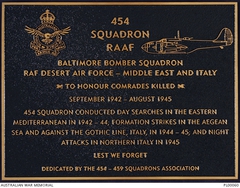 The following is an extract from the RAAF Museum Website:

No. 454 Squadron was formed as an 'Article XV' Squadron formed under the Empire Air Training Scheme with a RAAF designation, although throughout its operational phase of the War, most of its aircrew were not RAAF personnel.

Formed without aircraft in New South Wales on 23 May 1941, No 454 Squadron personnel soon sailed for the Middle East, where it was to receive its aircraft. On arrival, however, the Squadron's personnel were dispersed to service Royal Air Force (RAF) Halifax and Liberator aircraft.

In September 1942, No 454 Squadron received its first Blenheims. However, the Unit continued its support role, providing refresher training for Blenheim crews prior to their postings to operational RAF Squadrons. Finally in January 1943, No 454 Squadron began active operations when it converted to Martin Baltimores and begun anti-submarine and shipping patrols.

On one its first missions, a single Baltimore was attacked by two German fighters. In a surprising turn of events the lumbering bomber, shot down one fighter and so badly damaged the other that it broke off the combat.

Unfortunately soon after this event, No 454 Squadron was to suffer its most disastrous operation of the War. During a specially requested low level attack against factories and road targets on the island of Crete, six out of eight Baltimores dispatched were shot down by anti-aircraft fire, while both surviving aircraft were seriously damaged.

In July 1944 RAAF Baltimores shadowed a convoy of three merchant vessels escorted by ten naval vessels. Despite a fighter escort that harried them and shot one Baltimore down, the Squadron maintained contact with the convoy until a strike force could be gathered. In the ensuing attack on the convoy, the Baltimores sunk one of the merchant ships.

After the Allied invasion of Italy, No 454 Squadron deployed Italy and began daylight bombing missions against targets in Italy and Yugoslavia.

By January 1945, the Squadron had switched to night operations. These missions were particularly hazardous and on one mission, a Baltimore returned to base holed in over one hundred and fifty places, with its starboard engine out of action and the entire crew wounded.

No 454 Squadron flew its last operational flights on 1 May and disbanded on 14 August 1945.