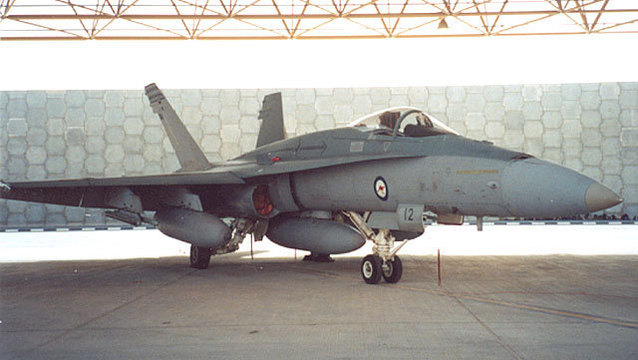 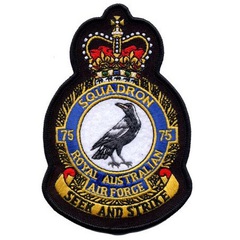 Formed in Queensland in March 1942, No 75 Squadron was to become one of the RAAF's most famous Units. Equipped with American-built Kittyhawk fighters and with only one week's training, the Squadron flew to New Guinea to try to stem the tide of what by then seemed the unstoppable tide of the Japanese siezure of the south west Pacific.

The story of their initial deployment is told in an excellent book and 1992 documentary '44 Days' (see link in sidebar).

The air battle for Port Moresby, conducted by No 75 Squadron from 21 March to 8 May 1942, stands as one of the more remarkable feats in RAAF history.

Immediately after forming at Sydney, and converting to an all-new aircraft type, the P40 E Kittyhawk (originally destined for service with the Netherlands East Indies Airforce), the unit was sent north to mount a desperate defence of Port Moresby.

Lasting just 44 days, but thwarting Japanese plans to capture this crucial allied base and take control of its strategically vital airfields and harbour facilities, their feat was an epic one. For nearly all of its six weeks on the front line 75 Squadron was the sole fighter unit in the area, being joined by American units only during its final week at Moresby.

Its first Commanding Officer was Squadron Leader Peter Jeffrey, who had extensive experience in the Middle East flying the Curtiss P-40E Kittyhawk with No. 3 Sqadron, and fortuitously the same which the new unit was being equipped. On 19 March, however, Jeffrey handed over command to Squadron Leader John Jackson (another pilot with Kittyhawk experience in the Middle East) and moved to raise a sister unit, No 76 Squadron.

When 75 Squadron’s deployment to Papua took place immediately afterwards,  the unit’s new pilots had an average of nine days training on the Kittyhawks and had fired their guns only once.

On 3 February Japanese aircraft began to conduct damaging raids on the army garrison and defences of Port Moresby. These raids were successful due to the lack of any allied fighter aircraft opposition in the area. In order to provide some measure of air defence forthe beleaguered garrison, the first ground elements of 75 Squadron began moving north from Townsville. By 21 March the squadron’s aircraft landed at Seven Mile Airfield, just out of of Port Moresby town.

Within hours of arrival,  two pilots were scrambled and successfully intercepted and destroyed an enemy reconnaissance aircraft over the town in full view of the garrison, providing a tremendous filip to the morale of the troops.  Gambling that the RAAF presence was not yet known to the Japanese, Squadron Leader Jackson decided to launch an attack on the Japanese airfield at on the north coast Lae early on 22 March.

This raid was an outstanding success, achieving complete surprise and destroying three bombers and nine fighters on the ground and another two fighters claimed destroyed in the air. Two of the nine Kittyhawks taking part in the raid were downed, with Flying Officer Bruce Anderson killed and Flying Officer Wilbur Wackett having to undertake an epic 320-kilometre trek in order to get back to Port Moresby.

Over the following weeks 75 Squadron aircraft were almost constantly in the air during daylight hours. Standing patrols, anti-strafing patrols and airfield cover patrols were conducted. The squadron also scrambled to intercept 32 incoming raids that varied in size and nature. Some consisted of bombers escorted by Zero fighters, while others were strafing attacks by fighters alone.

Control of the air was always contested and never totally lost to the enemy despite heavy losses to the Australians including the CO Squadron Leader John Jackson. 12 pilots were killed in
combat and 17 aircraft lost to enemy action.

On 30 April, 75 Squadron was joined by the Airacobra aircraft of the USAAF’s 8th Pursuit Group. The arrival of the Americans was timely, as aircraft availability in 75 Squadron had become critical ; only three Kittyhawks were serviceable. The last operational sortie of the squadron’s Moresby deployment―an interception of a bomber raid on 3 May―was undertaken jointly
with the American Airacobras and consisted of 75 Squadron’s sole serviceable aircraft.

On 7 May the unit was ordered back to Australia for replenishment and a well-earned rest.   To have formed and deployed into action within 17 days is an accomplishment that is without equal in RAAF history and indeed any other Air Force.

During its epic six weeks in the front line, the squadron claimed 35 enemy aircraft destroyed, four probably destroyed and 54 damaged. .

A replenished No 75 Squadron returned to New Guinea in Jly 1942 and joined with No 76 Squadron in the defence of Milne Bay. Soon after their arrival, a Japanese invasion force steaming towards Milne Bay came under attack from Squadron Kittyhawks modified to carry bombs.

Although a number of ships were damaged, the Japanese convoy sailed into Milne Bay on the 24 August, disembarking their troops before dawn. At first light, the Kittyhawks began shuttle attacks against landing barges, stores and troops. Despite torrential rain and appalling conditions ground personnel worked tirelessly to refuel and rearmed the Kittyhawks. Although Australian ground forces were contesting every yard, the enemy was soon so close that the Kittyhawks' guns were firing before their undercarriages had retracted.

Gradually the Australians gained the upper hand and when it became apparent to the Japanese that the battle was lost, Japanese ships, under the relative protection of darkness, entered Milne Bay and embarked what troops and equipment they could.

After playing its part in the first defeat of Japanese ground forces in the Pacific War, No 75 Squadron - operating from a succession of bases - continued to attack Japanese garrisons for the duration of the war, now a part of a Wing of P40s working in close collaboration.

After the Squadron's return to Australia in 1955, the Vampires were soon replaced by the highly manoeuvrable Sabre. This popular aircraft was in turn replaced by the supersonic Mirage in August 1965.

In 1967, No 75 Squadron deployed to Malaysia and after sixteen years in Butterworth, Malaysia, returned to Australia, based at Darwin to await conversion to the F/A-18 Hornet and eventual relocation to RAAF Base Tindal in October 1988.

Today, No 75 Squadron is the largest F/A-18 unit in the Air Force. The squadron's remote location requires self-sufficiency, including large numbers of maintenance crews to maintain operational readiness.

The pilots of No 75 Squadron have few airspace restrictions and, with the Delamere Range only 100 kms away, they are able to train with a large variety of air-to-ground weapons. The suitability of northern Australia for training gives the squadron the opportunity to exercise regularly with air forces from Malaysia, New Zealand, Singapore and the United States of America. No 75 Squadron have also had aircraft and personnel involved in recent operations as a component of the International Coalition Against Terrorism in Iraq, Afghanistan and the Indian Ocean.