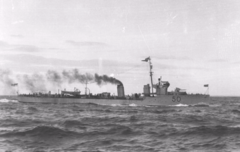 HMAS Huon was one of six River Class Torpedo Boat Destroyers built for the Royal Australian Navy during the period 1909-1916. During World War I they formed the Australian Destroyer Flotilla. Sister ships were HMA Ships Parramatta, Swan, Torrens, Warrego and Yarra.

Huon commissioned at Sydney on 14 December 1915 but did not complete until 2 February 1916. After working up in Australian waters she departed Sydney on 19 June 1916 to enter service as a unit of the British Far East Patrol, arriving at Sandakan, Borneo, on 24 July 1916. She at once proceeded on patrol along the northern coast of Celebes. Huon was joined in the Malayan Archipelago in September 1916 by Swan and Torrens.

The threat presented by the German submarine campaign of 1917 led to the transfer of the Australian Flotilla to the Mediterranean at the request of the British Government. Following a refit in June, Huon left Singapore for Europe on 2 July 1917 with Swan and Torrens in company. On 7 July the three destroyers joined their sister ships Parramatta (Flotilla Leader), Warrego and Yarra at Cocos Island. The latter three ships had arrived from Australia.

Following refits at Malta and combined anti-submarine exercises the Australian Flotilla was based in October 1917 on Brindisi and assigned the task of maintaining patrols in the Straits of Otranto. The purpose of the patrol was to prevent the passage into the Mediterranean of enemy submarines based on Austrian Adriatic ports.

In April 1918 the Australian ships became part of the British 5th Destroyer Flotilla. Huon arrived at Genoa on 19 August and did not leave the dock until 10 November 1918, one day before the Armistice was signed. Sadly while in Genoa the Spanish influenza pandemic, then sweeping through western Europe, struck the ship and five members of the ship's company succumbed to the disease.