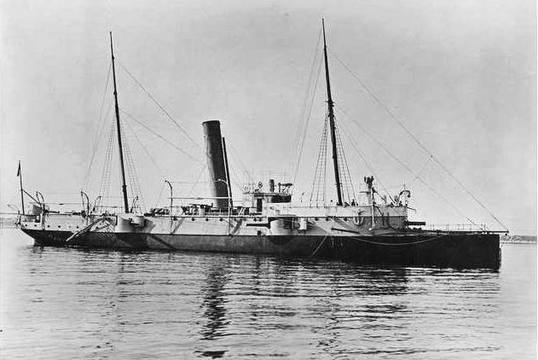 Her Majesty's Colonial Ship "Protector" was a "Flat Iron Gunboat" purchased and commissioned by the South Australian Government in 1884, following the "Russian Gunboat" scare of 1882 when the good citizens of Glenelg awoke to find a flotilla of Russian warships at anchor in Holdfast Bay on their doorstep.

Built at William Armstrong & Co, Newcastle-on-Tyne, England, Protector was built to a standard 'F1' flat-iron gunboat specification, but was one of the largest of its type, and was classified as a light cruiser, with a displacement of 920 tons.

Other armaments included five 6-inch (152 mm) Woolwich-Armstrong rifled, breech-loading guns mounted in hull sponsons; four 3-pounder 1.85 calibre Hotchkiss QF (Quick Firing - which means they fired a cartridge munition with a brass case as opposed to a 'bag charge') guns and five 10-barrel Gatling machine guns.  That is a lot of firepower indeed, in the age of "Gunboat Diplomacy".

Her crew was 85 - 96 personnel, most of whom would appear to have been gunnery numbers to serve such a large floating arsenal!

At the outbreak of World War I, her armament was increased to include two 4-inch (100 mm) guns, two 12-pounder guns and four 3-pounder guns.

As an item of Defence capital equipment, Protector rendered particularly cost-effective service to her owners.  Purchased for 65 thousand pounds, she served in the Boxer Rebellion in 1900, and after being taken over by the Royal Australian Navy post-Federation, she served on in WW1 as a submarine and base tender during the Rabaul campaign and later, as a minesweeper and depot ship.  Re-named HMAS Cerberus in 1921, she was decommissioned and paid off in 1924. She lived on as a lighter in private hands, in WW2, under a number of guises.  Having been requisitioned by the US Governmen, in July 1943, after a collison with a tug off Gladstone, the hull was taken under tow to Queensland's Heron island, where she was grounded and sunk as a breakwater. 59 years faithful service in all - something of a record.   Her hull remains visible to this day.  Some of her guns are on display in various locations around Adelaide and her wheel is display at Sydney's RAN Heritage Centre.