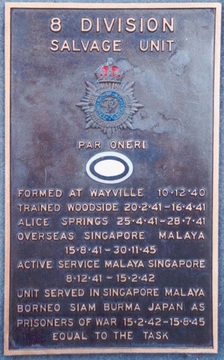 The 8th Division Salvage Unit was raised at Wayville, South Australia on 4 December, 1940. Under the command Lieutenant Jack Thomas Pool (/explore/people/598557), the 43 soldiers that comprised the salvage unit were one of a number of small support units that were attached to the 8th Division (/explore/units/2097) during World War Two. The purpose of the unit was to scavenge a battlefield for equipment, arms and ammunition after the fighting in the area had moved away. They would then be responsible for the repairs and redistribution of the equipment, arms and ammunition they had 'salvaged' from the battlefield to other fighting units in the 8th Division.

Whilst, this was their intended purpose, the 8th Division Salvage Unit, barely performed these duties in its entire war service. Originally, posted to Alice Springs in the Northern Territory in early 1941 they worked as labouring troops. It would only be in late July 1941 that the salvage unit embarked from Melbourne to join the rest of the 8th Division in Malaya and Singapore. Here too, however, they were originally utilised as skilled labouring troops before finally using their specific skills of salvaging and requisitioning military equipment, arms and ammunition from isolated field dumps when the Japanese attacked Northern Malaya and made their way down the peninsula.

The salvage unit, like most of the 8th Division, eventually surrendered to Japanese Forces on the island of Singapore on 15 February, 1942. For the rest of war, the men that made up the 8th Division Salvage Unit remained Prisoners of War at the mercy of their Japanese captors. When the war finally ended, over three years later, of the 43 men that had embarked at Melbourne in mid-1941 only 22 returned in late 1945. It was such a tragic loss of life, both for the small support unit itself and for the rest of the state of South Australia from where all the men hailed.