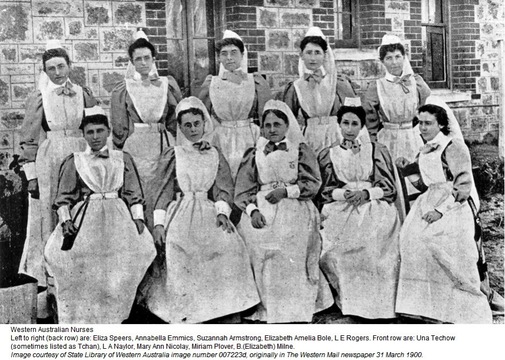 "21 March 1900, sponsored by the public, (They had no connection with the army) Sister Nicolay conducted ten nurses to the South African War in the steamer Salamis at Albany, despite criticism for taking scarce, trained personnel from local hospitals. Criticism was also based on many ‘experts’ view that women had no role on the battlefield and had no skills which were appropriate for military nursing. Writers to the papers stated that they had heard positively that British military authorities were turning away a deluge of nurses wanting to nurse in South Africa. The coordination of the contingent was by the Western Australian Nurses Contingent Fund chaired by Lady Forest. Fund-raising activities including a concert in Perth Town Hall were held to pay for the contingent. The nurses themselves assisted in the fund-raising."