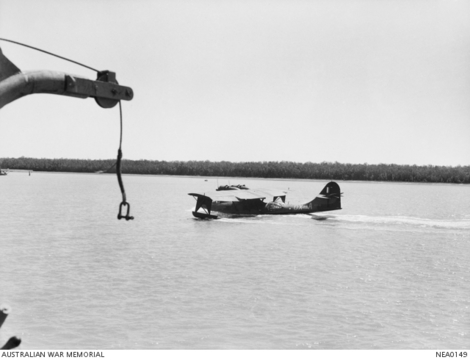 No. 43 Squadron (RAAF)was a maritime patrol unit raised for service in WW2 and which operated Consolidated PBY Catalina flying boats exclusively, becoming part of the 'Black Cats' of No. 76 Wing, so-called becasue they were painted matt black overall and operated mainly at night on minelaying operations in the East indies and New Guinea.

No. 43 Squadron (RAAF) was raised at Bowen, Queensland, on 1 May 1943, with Flight Lieutenant Addison who acted as the unit's temporary Commanding Officer until Squadron Leader C.F. Thompson assumed the appointment on 13 August 1943.

Prior to the change of command, the unit had moved to its operational base at Kurumba, in the Gulf of Carpentaria, Queensland. The advance party departed from Bowen on 3 June 1943, and arrived at Kurumba on the 9th. The Squadron Headquarters was established and operational on 19 August 1943.

The first of the unit's Catalina aircraft arrived on 7 August, when Flying Officers A.E. Delahunty and R.I. Chinnick delivered A24-56 and A24-64, respectively, to the Squadron. The arrival of the aircraft enabled the unit to fly its first operation from Bowen on 17 August, when the same pilots undertook a search for a missing Catalina.

Squadron Leader Thompson led Chinnick, Delahunty and Flight Lieutenant R.H.S. Gray on the first strike undertaken by 43 Squadron on the night of 8 September, when the Catalinas struck at targets at Amboina. Operations from Kurumba included similar attacks on Babo, Langgoer, Ambon, Sarong, TOeal, Kaimana, Jefman and Taberfane. On one occasion one aircraft was intercepted by an enemy night fighter. On the night of 31 January 1944, Squadron Leader S.C. Middlemiss was caught by a searchlight beam over Panapai. An enemy fighter, thought to have been a 'Dinah', made a pass from above and astern, firing tracer and explosive rounds, before passing beneath the diving Catalina. The Australian aircraft was damaged by small calibre hits on the starboard elevator.

43 Squadron maintained a detachment at Bowen, which undertook anti-submarine and convoy patrols, and cooperated with 11 and 20 Squadron aircraft to attack Kavieng. It was on the night of 29 December 1944 that Flight Lieutenant Miller, making his third run over the target area, suffered a direct hit on the starboard motor of his aircraft. The propeller was feathered, and the guns, ammunition and special equipment jettisoned to lighten the aircraft. Despite these efforts, it was not possible to cross New Britain on one engine, so Miller headed north to wait the dawn near the Witu Island group, before finally landing at Finschhafen, where the aircraft was repaired.

The Squadron transferred to Darwin on 9 April 1944, where it commenced new operations from its facilities at Doctor's Gully. One night early in April, Wing Commander Thompson lead Flight Lieutenants Gray, Righetti and Marr, Flight Sergeant Abbey and Pilot Officer Longmuir, on the first of many 'special missions ' –– the laying of mines in enemy waters and harbours. Abbey did not return from this mission, and may have crashed over the target. Gray's aircraft was hit in the hull by anti-aircraft fire, and Gray and his second pilot were both injured. The crew crash-landed on a beach when they returned.

Aircraft staged through 'Shecat' and as far afield as Morotai to complete their missions. The Catalinas flew up to 25 hours on individual mining tasks, and blockaded areas such as the Hainan, Surabaja and Laoet Straits, and harbours at Hong Kong, Amoy, Seroea and Pascadores Islands. It was a task which required flying and navigational skills, and patience. One can only imagine the feelings of a crew who flew a long 20-hour mission to Hong Kong, only to find that the weather conditions at the target made it impossible to drop the mines, which had to be returned to base. The last mining mission undertaken by 43 Squadron personnel was on the night of 29 July 1945, when mines were dropped in Bangka Strait.

Mining was not the only task undertaken by Catalina aircraft of 43 Squadron. These aircraft flew air-sea rescue sorties in support of long range bomber strikes on targets in the Dutch East Indies (now Indonesia), as well as harassing Japanese facilities at Mandac, Lomboeng, Boeloedoang, Kendari and Ambesia. These operations were not without casualties; Flying Officer Temperley and crew were reported missing when they did not return from operations on 21 July 1944.

The Squadron also flew anti-shipping strikes, the most spectacular of which occurred on 26 June 1944. Squadron Leader L.M. Hurt and crew made a torpedo attack on an enemy merchang ship anchored in Bima Bay. Although the Catalina faced intense anti-aircraft fire, Hurt successfully dropped his torpedo, but was seriously injured in the process. The second pilot, Flying Officer B.A. Titshall, flew the aircraft back to base under difficult conditions.

Even though the War ended in August, 43 Squadron flew patrols over the Dutch East Indies and the approaches to Darwin until being warned, on 10 November 1945, that it would be moving to Rathmines, New South Wales, at the end of the month. The advance party, under the command of Flight Lieutenant O.K. Crewes, departed on the 15th, and the move of the Squadron from Doctor's Gully had been completed by 3 December 1945.

Notification was received from Headquarters Eastern Area that the Squadron would cease operations on 1 February 1946, and the unit was disbanded on 11 March 1946.