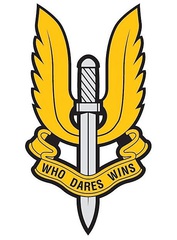 The Special Air Service Regiment, officially abbreviated SASR though commonly known as the SAS, is a special forces unit of the Australian Army. Formed in 1957, it was modelled on the British SAS sharing the motto, "Who Dares Wins". The regiment is based at Campbell Barracks, in Swanbourne, a suburb of Perth, Western Australia, and is a direct command unit of the Special Operations Command. It has taken part in operations in Borneo, Vietnam, Somalia, East Timor, Iraq and Afghanistan, as well as many other peacekeeping missions. The SASR also provides a counter-terrorist capability, and has been involved in a number of domestic security operations.