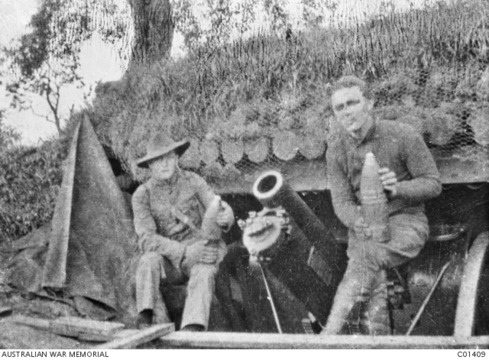 The 102nd Howitzer Battery was raised as part of the 21st Howitzer Brigade, raised in March 1916 and to be equipped with the new 4.5inch Howitzer rolling off the production lines in the UK.

Howitzer Batteries were raised in Egypt for deployment to France as part of five Howitzer Artillery Brigades numbered 21-25 with the second digit corresponding to the number of its supported Division. The aim was to provide a high angle fire capability based on experience at Gallipoli, where the terrain masked much of the effect of Field Artillery and their 18 pounder guns with their characteristically flatter trajectory than that exhibited by howitzers and mortars.  In addition, the Western Front had found field guns like the 18 pounder wanting in that they just did not have the destructive power needed to defeat well prepared defensive positions such as German blockhouses and concrete dugouts. Something bigger was needed with greater weight of shell.  The 4.5 inch Howitzer was the answer.

Supply of howitzers was an issue intially and there weren't enough to go around, so the Howitzer Brigades were broken up and a Battery allocated to each Field Artillery Brigade to augment the Field Batteries in one of the many re-organisations that characterised the AIF artillery in WW1.

The 102nd was allocated to the 2nd Field Artillery Brigade, with which it served out the rest of the war.

The 4.5 " Howitzers  went on to render excellent service, only being withdrawn at the end of WW2.