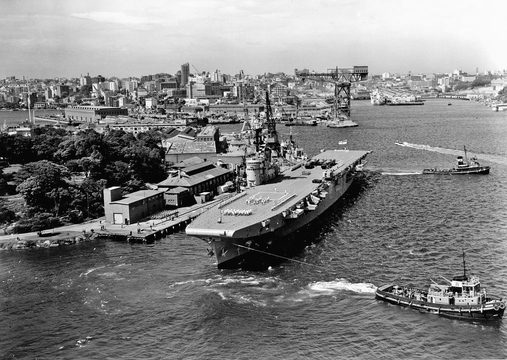 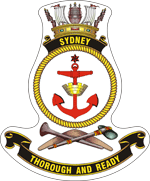 Australia's first aircraft carrier, HMAS Sydney (varioously designated as pennant No. R17/A214/P214/L134),  was a Majestic-class light aircraft carrier operated by the Royal Australian Navy (RAN). She was built at the HM Devenport Shipyard, laid down in 1943 for the Royal Navy and was launched as HMS Terrible in 1944, but was not completed before the end of World War II. The carrier was sold to Australia in 1947, completed, and commissioned into the RAN as Sydney in 1948, the third RAN ship to bear the name.

Sydney was the first of three conventional aircraft carriers to serve in the RAN, and operated as the navy's flagship during the early part of her career. From late 1951 to early 1952, she operated off the coast of Korea during the Korean War, making her the first carrier owned by a Commonwealth Dominion, and the only carrier in the RAN, to see wartime service. Retasked as a training vessel following the 1955 arrival of her modernised sister ship, HMAS Melbourne, Sydney remained in service until 1958, when she was placed in reserve as surplus to requirements.

The need for a sealift capability saw the ship modified for service as a fast troop transport, and recommissioned in 1962. Sydney was initially used for training and a single supply run in support of Malaysia's defence policy against Indonesia, but in 1965, she sailed on the first voyage to Vũng Tàu, transporting soldiers and equipment to serve in the Vietnam War. 25 voyages to Vietnam were made between 1965 and 1972, earning the ship the nickname "Vung Tau Ferry".

Sydney was decommissioned in 1973, and was not replaced. Despite several plans to preserve all or part of the ship as a maritime museum, tourist attraction, or car park, the carrier was sold to a South Korean steel mill for scrapping in 1975.