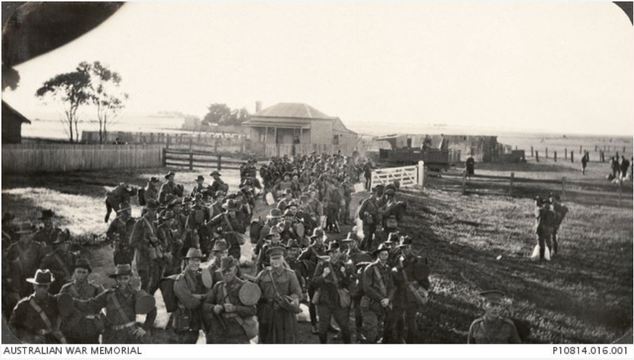 Information and History of No. 2 Squadron , Australian Flying Corps

History Information
The second squadron of the Australian Flying Corps (AFC) was formed, as 68 (Australian) Squadron, Royal Flying Corps (RFC), at Kantara in Egypt on 20 September 1916. Its initial personnel were drawn from 67 (Australian) Squadron and were soon supplemented by volunteers from the light horse regiments and extra mechanics from Australia. The squadron proceeded to the United Kingdom for training in January 1917, and in September was deployed for operations over the Western Front.

Equipped initially with DH-5 aircraft, 67 Squadron was a "scout" squadron, the main role of which was to escort larger, slower aircraft, seek out and destroy the enemy's aircraft, and provide support for ground troops. In France, the squadron joined the 13th Army Wing, RFC, at Baizieux and its aircraft were involved in their first engagement on 2 October 1917. The squadron was soon drawn into the ongoing operations that constituted the third battle of Ypres, and was heavily involved in ground attack operations. This role continued during the battle of Cambrai (20 November - 7 December 1917). On the first day of the battle 67 Squadron lost seven of its eighteen aircraft either destroyed or badly damaged; on each day of the battle, losses among the ground attack squadrons averaged 30 per cent. Six Military Crosses were awarded to 67 Squadron personnel for their actions above the Cambrai battlefield.

In December 1917, 67 Squadron was re-equipped with SE-5 aircraft but its operations throughout the winter of 1917-18 were hampered by bad weather. The squadron was redesignated 2 Squadron, Australian Flying Corps, on 4 January 1918. Early 1918 saw the squadron operate from a succession of airfields under the command of several RAF wings - 10th, 22nd and then 51st. Like much of the Allied air forces, the squadron operated at fever pitch during the German spring offensive to regain the initiative in the air and support the troops on the ground. In June, the squadron played a similar role in support of French forces when the Germans launched their Marne offensive.

0n 21 June 1918, 2 Squadron along with 4 Squadron, AFC, and 46 and 103 Squadrons of the RAF, became part of the newly formed 80th Wing. 2 Squadron was active throughout the Allied counter-offensive. It was almost as mobile on the ground as it was in the air, relocating on several occasions to ensure it was best placed to support the Allied advance. By this stage in the war the Allied air forces had almost complete dominance of the air.

The squadron's last major operation of the war was flown on 9 November 1918. After the Armistice, squadron personnel were involved in evaluating captured German aircraft. The squadron relinquished its own aircraft and returned to the United Kingdom in February 1919. On 6 May it sailed for home aboard the Kaisar-i-Hind. 2 Squadron finally disbanded with disembarkation of last members in Sydney on 18 June.