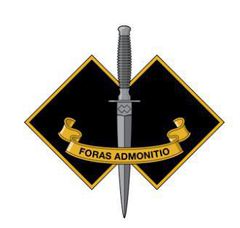 2nd Commando Regiment (2 Cdo Regt) is an Australian Army Special Forces unit; one of three combat-capable units within the Australian Special Operations Command. The regiment was established on 19 June 2009 when it was raised from the 4th Battalion, The Royal Australian Regiment (Commando) (4 RAR (Cdo)).2nd Commando Regiment’s history stems from the decision in 1996 to convert 4 RAR, a light infantry battalion, into a Commando Regiment. On 1 February 1997 4 RAR was renamed and re-roled as 4 RAR (Cdo) and commenced the development of Australia’s first regular Commando capability. This development was conducted through a period of continuous operational tasking with collective deployments to Solomon Islands, East Timor, Iraq and Afghanistan. Throughout these operations the Regiment served with distinction, notably receiving the Unit Citation for Gallantry for its service as a part of the Special Operations Task Group in 2005-2006.

2nd Commando Regiment’s new regimental badge was created to reflect the history and traditions of Australian Commandos and the offensive nature of the unit. The centre feature of the badge is a silver Fairbairn-Sykes fighting knife, universally recognised as the symbol of a Special Forces unit, and is backed by the blackened double diamonds, representative of the felt colour patches worn on Australian Commando uniforms of WWII. The regiments motto is included in a gold scroll, Foras Admonitio or latin for Without Warning. The motto highlights not only the challenges of modern warfare, but the modus operandi of 2nd Commando Regiment.