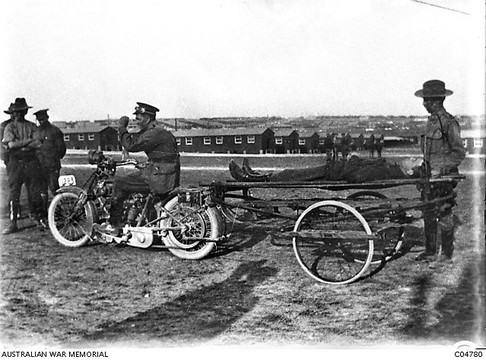 The 9th Brigade saw its first major action at Messines in June 1917, where it was based at Pont d'Achelles.  It went on to serve in the major campaigns of the remainder of the war in which the 3rd Division was involved, culminating in the "Last Hundred Days" offensive from 8th August until the Armistice.

They in turn were supported by unit stretcher bearers, generally drawn from the Battalion Band.  These men would be trained to administer First Aid sufficient to clear airways, staunch bleeding and perhaps splint fractures so that casualties could be evacuated to the Battalion RAP.   Casualties would be hand carried - requiring at least four men but more like eight over any distance, for each casualty.  When mass casualties occurred, such as through major shelling or an enemy attack,  decisions would have to be made about the priority of evacuation.   The RMO would assess the casualty and decide whether they were to be evacuated and with what priority.  Grievous wounds with little chance of survival would generally not be evacuated.

The Field Ambulance would have personnel deployed forward to retrieve casualties from the RAP to the rear.

They may have had a number of means to assist in casualty evacuation from light rail, horse drawn vehicles and even motor vehicles.  Or they could indeed also be stretcher borne.  The next stage was movement of casualties to a Casualty Clearing Station (CCS)

From a CCS casulaties might be taken to a Field Hospital or straight to a General Hospital.

In more recent times, soldiers with serious wounds who need surgery have what is called "The Golden Hour" to receive the treatment they need.  After that time their chance of survival diminishes rapidly.

During WW 1, conditions were such that evacuation times were extended considerably by poor weather, the predominance of water, mud, the detritus of battle, shell torn ground and enemy action.  Perhaps most significant at that time infection (often described as 'sepsis') was also a great risk as it was prior to the discovery of penicillin and other antibiotics.