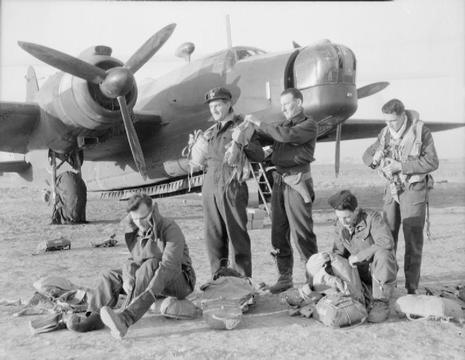 No 40. Squadron RAF is included on this site becasue it was one of the many to which indvidual RAAF personnel were assigned during WW2, and in which they served, fought and often died.  These men were collectively known as 'Odd Bods'.

In November 1940 the squadron converted to the Wellington, and spent the next year operating as a night bomber squadron with Bomber Command.  On the 14 April 1940 it gained unwanted attention when one of the Squadrons Blenheims (L9207) was taken on an unauthorized flight by AC2 JFB Lewis and crashed in the Thames Estuary. His body was not found and he is remembered on the Runnymede Memorial.

In October 1941 some of the squadron's aircraft were flown to Malta, the rest of the squadron following there in February 1942.  A remaining UK-based element was re-designated No. 156 Squadron RAF.

In Malta the Squadron's role included the interdiction of Axis shipping to disrupt re-supply of enemy forces in North Africa, and attacking ground targets in Italy and North Africa.  Malta was itself the subject of sustained air attack by Axis Air Forces and losses were sustained as a result.

This continued until May 1942, when the surviving aircraft were transferred to Egypt.  Once the squadron had recovered from its battering on Malta, it began to fly operations against the Axis forces in North Africa, moving west as the Allies advanced into Tunisia and Cyrenaica.  They participated in the successful Allied invasion of Sicily, concluding in August 1943,  before finally moving to Italy in December 1943.

Based for most of the rest of the war at Foggia Main airbase near the Adriatic coast, the unit carried out raids on targets in northern Italy and the Balkans.  It retained later Marks of the sturdy Wellington until very late in the war when it re-equipped with the Consolidated B24 Liberator four engined heavy bomber.