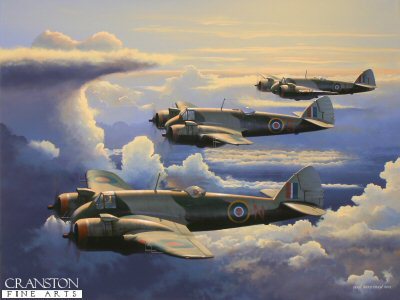 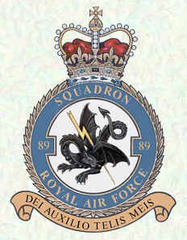 No. 89 was formed on 1 September 1917 at Catterick as a training unit but was disbanded on 4 July 1918 without becoming operational.

It reformed again at Wyton on 11 November 1918, but as WW1 ended that day, its reformation was immediately suspended.

On 25 September 1941, No. 89 reformed at Colerne as a night-fighter unit, flying its Beaufighters out to the Middle East in November and beginning night patrols in December.

A detachment was sent to Malta in June 1942, which also flew intruder missions over Sicily. Detachments were based along the North African coast for night defence until October 1943, when the Squadron moved to Ceylon.

In September 1944, intruder flights over Burma began in addition to normal night-fighter patrols. Conversion to Mosquitoes took place early in 1945 and in September No. 89 moved to Singapore where it lost its aircraft in March 1946. It flew some Walruses on air-sea rescue duties until it was disbanded on 1 May 1946.

On 15 September 1955, No. 89 reformed at Stradishall with Venom night-fighters. In October it converted to Javelins which it flew until renumbered No. 85 Squadron on 30 November 1958.