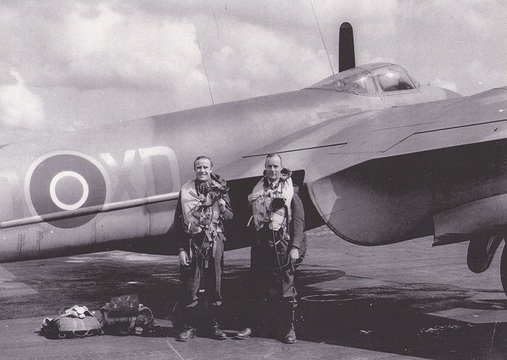 No. 139 Squadron (RAF) is featured here because it was one of many RAF units to which individual RAAF members were posted, and in which they served fought and often died.

No. 139 Squadron had served in WW1 but was disbanded before re-raising prior to WW2.  When hostilities broke out in September 1939, the squadron was equipped with Bristol Blenheim light bombers and flew the first RAF sortie to cross the German frontier.

After duty in the Battle of France (during which, like its contemporary RAF light bomber units,  it suffered very heavy casualties) the squadron returned to England, re-formed, and subsequently made many attacks on fringe targets in NW Europe - including the 'invasion ports' from which it was feared the Germans would mount their anticipated invasion of England - and many anti-shipping sweeps.

As was the case in many British colonies and 'outposts of Empire, a Jamaican newspaper, The Daily Gleaner, started a fund to buy bombers for Britain. The money Jamaica subscribed was the foundation of the "Bombers for Britain" Fund, to which many other Colonies and Dominions subsequently contributed. Jamaica herself contributed enough money to buy twelve Blenheims by 1941 and in recognition of this service it was decided, in the words of Lord Beaverbrook, the wartime Minister of Aircraft Production, "that Jamaica 's name shall evermore be linked with a squadron of the Royal Air Force".  This gesture was later widely repeated.

In December 1941 the Squadron was assigned to the Far East.  The records suggest that pesonnel may have been despatched but not aircraft -  it was equipped initially with Lockheed Hudson aircraft that were presumably already in-theatre. The squadron was renumbered in April 1942 after only four months to No. 62 Squadron, so 139 was effectively disbanded only to be re-raised back in the UK in June 1942.  It breifly resume operating Blenheims until October 1942.

It was then that No. 139 Squadron became just the second unit to be equipped with the next generation and definitive RAF light bomber, the de Havilland Mosquito.  It represented a completly new paradigm in operations.  Fast and highly-manoeuvrable the Mosquito became legendary as a low- level daylight and dusk precision raider par excellence on targets in enemy-occupied Europe.

It often paired with No. 105 Squadron, the unit that had preceded it into Mosquito operations.  One of the most notable operations of this period was a daylight raid on Berlin on 30th January 1943, when two No. 139 Squadron crews tried to interrupt an important speech by Dr. Goebbels, Germany's Propaganda Minister. Although it failed to achieve its aim, this raid made news by following close behind a No. 105 Squadron raid which was the first on the German capital and had sdisrupted a speech by Herman Goering for more than an hour.

It also famously paired with 105 to lead a raid on the Phillips electronics plant in Holland.

In the summer of 1943 No. 139 Squadron joined the Pathfinder Force,  preceding waves of heavy bombers to drop 'Window' (thin strips of metal foil matched to the wavelength of German air defence radar) and so confuse the enemy's early warning systems and making decoy approaches to other targets to divert enemy night fighters.    In 1944 it was equipped with the H2S ground mapping radar allowing more precise navigation in leading the bomber strem to their target.  The Squadron led raids on the most famous targets in Germany - Berlin, Hamburg, Cologne, Mannheim, Hanover, Duisburg, Lübeck, and many others.

The Mosquito was able to carry the 4,000-lb. "cookie" blast bomb and these were dropped along with the target indication devices (mainly flares) on targets to guide the main force.

The Jamaica Squadron made a series of 36 consecutive night attacks on Berlin between 20th/21st February to 27/28th March inclusive, as the net closed on the German capital.  On 2nd/3rd May 1945, the Squadron made its last raid of the war with an attack by 14 Mosquitos (including several Canadian-built Mk. XXs) on Kiel.

The Squadron served on after WW2, operating among other aircraft the English Electric Canberra jet bomber and later the Handley Page Victor 'V Bomber' before finally disbanding in 1969