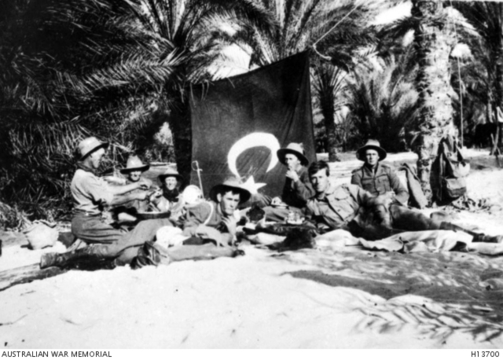 Light Horse units were deployed to Gallipoli to fight as infantry.  The 3rd Light Horse Brigade formed the first wave of the ill-starred charge at the Nek in August 1915  The casualties were calamitous and the Brigade, understrength and its leadership weakened through loss, remained in largely a defensive role until the evacuation.

"And so perished the 8th Light Horse"

We had about one hundred yards to go, the first line starting from saps which are trenches in front of the firing line leading in the enemy’s direction. At twenty five minutes past four we stood up on the banquettes of our trenches and in a few minutes the crackle of musketry turned into a roar. Never have I [Captain Lelsie Hore] heard such an awful sound and no wonder. We knew they had three machine guns trained on the Nek and quite possibly there more. Their trench must have had at least two hundred men. Judging from the number we had in ours more likely two hundred and fifty. Now a machine gun firs at top speed six hundred rounds per minute and a rifleman fifteen rounds per minute. So we had concentrated on a piece of land say two hundred yards long and one hundred yards deep no fewer than five thousand bullets per minute.

Out went the first line and we waited for our word, by the time they had gone the first forty yards they were down to a man. What could one hundred and seventy five men do against that volume of fire? We saw our fate in front of us but we were pledged to go and to their eternal credit the word being given not a man in the second line stayed in his trench. As I jumped out I looked down the line and they were all rising over the parapet. We bent low and ran as hard as we could. Ahead we could see the trench aflame with rifle fire. All round were smoke and dust kicked up by the bullets. I felt a sting on my shoulder and remember thinking it could not be a hit or it would have hurt more. It bled a lot afterward but was only a flesh wound.

I passed our first line all dead or dying it seemed and went on a bit further and flung myself down about forty yards from the Turkish trenches. I was a bit ahead of my men having got a good start and traveling lighter. I looked round and saw them all down mostly hit.

I did not know what to do, the dirt was spurting up all around like rain from a pavement in a thunderstorm. Some bigger spurts near me were either bombs or pom poms. I could notice they were much bigger. The trench ahead was a living flame, the roar of musketry not a bit diminished. I was protected by a little, a very little fold in the ground and by a dead Turk dead about six weeks. I had looked round again and reckoned I could get about six men to follow and it would have been murder to take them on.

Lastly the supports had not started and if they had, they were only one hundred and seventy five for the whole line, absolutely and totally inadequate. I made up my mind and started to shove myself backwards on the flat of my stomach. After going a few yards I felt a hard sting in my right foot but so long as my arms and chest were right I didn’t mind. I passed through our dead and fell into one of the saps and managed to limp out into one of the back trenches and lay down wondering how on earth I got out of it. My three subalterns were killed and I should say about seventy percent of my men. There were no live men near me when I started back except one who did the same as I did and I hope got back.

Our Colonel was killed, one Major killed the other wounded, the only Captain (myself) wounded and ten subalterns killed and three wounded leaving two officers not hit, and about five percent of the men. And so perished the 8th Light Horse.