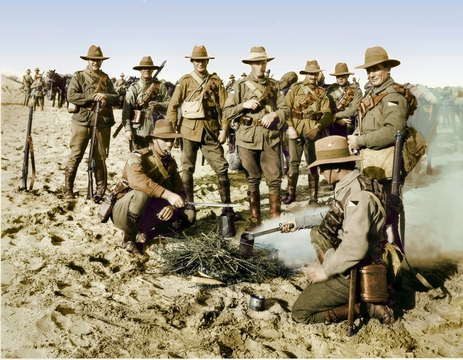 The 3rd Light Horse Regiment was raised in Adelaide on 17 August 1914. Although most of its recruits were enlisted in South Australia, one of the regiment’s three squadrons was composed of Tasmanians and was raised and trained in Hobart. The two components sailed from their home ports in late October 1914 and arrived in Egypt in the second week of December. Here, they joined the 1st and 2nd Regiments to form the 1st Light Horse Brigade.

The 1st Light Horse Brigade deployed to Gallipoli without its horses and landed there on 12 May 1915, joining the New Zealand and Australian Division. The 3rd Light Horse played a defensive role throughout the campaign and was in reserve when its sister regiments attacked as part of the August offensive.  The Commanding Officer Lieutenant Colonel Rowell (/explore/people/360639) became a casualty, was evacuated with acute peritonitis to Alexandria, but died and was buried at sea.  The Regiment left Gallipoli on 14 December 1915.

Back in Egypt, the 3rd Light Horse joined the ANZAC Mounted Division. Between January and May 1916, the regiment was deployed to protect the Nile valley from bands of pro-Turkish SenussiArabs. On 18 May, as part of its parent brigade, it joined the forces defending the Suez Canal. The 1st Light Horse Brigade played a significant role in turning back the Turkish advance on the canal at the battle of Romani on 4 August. In ensuing days the regiments of the brigade participated in the immediate follow-up of the defeated Turks, but were soon withdrawn to rest.

The 3rd Light Horse rejoined the Allied advance across the Sinai in November and was subsequently involved in the fighting to secure the Turkish outposts on the Palestine frontier - Maghdaba on 23 December 1916 and Rafa on 9 January 1917. A stint of protective duty along the line of communications through the Sinai followed. The 3rd’s next major engagement was the abortive second battle of Gaza on 19 April. Gaza finally fell on 7 November, after a wide outflanking move via Beersheba, in which the 1st Light Horse Brigade played a part.

With the capture of Gaza, the Turkish position in southern Palestine collapsed. The 3rd Light Horse Regiment participated in the advance to Jaffa that followed, and was then committed to operations to clear and occupy the west bank of the Jordan River. It was involved in the Amman (24-27 February) and Es Salt (30 April-4 May) raids and the repulse of a major German and Turkish attack on 14 July 1918.

The final British offensive of the campaign was launched along the Mediterranean coast on 19 September 1918, with the ANZAC Mounted Division taking part in a subsidiary effort east of the Jordan aimed at Amman. Turkey surrendered on 30 October 1918. The 3rd Light Horse Regiment sailed for Australia on 16 March 1919 without their horses.

Australian quarantine regulations forbade the re-importation of horses sent overseas.  There is an urban myth that the horses were all shot rather than turn them over to the ownership of locals, who the Light Horsemen regarded as cruel and unworthy of the ownership of their trusted mounts. While some were destroyed, most were sent to the traditional destination of 'Walers' , as the rangy stock horses were known; most were transferred to Indian Army cavalry units.