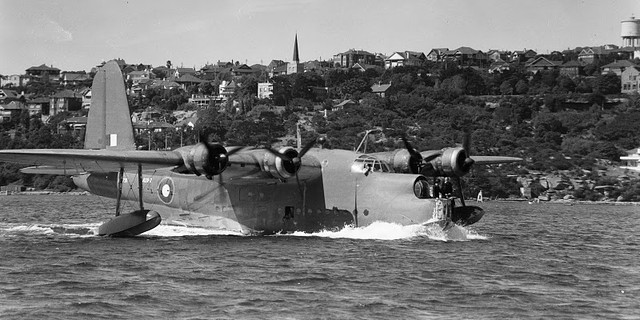 No. 40 Squadron was raised in Townsville on 31 March 1944, largely with seasoned crews from Europe manning six Short Sunderland flying boats, ordered specially for No. 40 Squadron and flown out from the UK.

The RAAF had procured a squadron's worth of Short Sunderland aircraft in 1939, but they were never delivered to Australia.  War broke out while the crews were in the UK and No. 10 Squadron served out the war in anti-submarine patrols mainly over the Bay of Biscay.  Later joined by No. 461 Squadron, the Sunderland was a well regarded aircraft.

In the Pacific Theatre of operations a need was recognised for an aircraft that could fly long distances; carry a useful payload of both freight and passengers; and, operate with limited land-based facilities.  Consolidated PBY Catalinas were already in service, but the Sunderland filled a niche requirement.  It had a prodigious cargo capacity.  No land based aircraft could fulfill all of the requirements so the RAAF decided to use a modified version of the proven Sunderland aircraft.  Accordingly, an order was placed with Short Brothers in Belfast in October 1943 for six Sunderland III aircraft . Five of them were new builds in October 1943 and the sixth was an ex-RAF airframe built in 1942; all six aircraft were transferred to the RAAF at the No. 461 Squadron base at RAF Station Mount Batten (Plymouth) in November 1943 and prepared for delivery to Australia, and ferried out during the period January-March 1944.  On average the delivery flights about took about 4 - 5 weeks.

The aircaft were modified to carry both freight and passengers and fitted with Identification, Friend or Foe (IFF) and modern radar for Australian service. No. 40 Squadron's primary role was to fly regular scheduled services between Australia and New Guinea carrying passengers and freight. In July 1944 the squadron moved to Port Moresby and operated from there until 1946, with detachments in Townsville, Cairns and Darwin.  Following the Japanese surrender the squadron repatriated PoW and other returning Allied soldiers, sailors and airmen back to Australia.

No. 40 Squadron suffered its only loss on 28 November 1944 when Sunderland A26-6 struck a marine marker post and sank after landing at Townsville; there were no fatalities.

A No. 40 Squadron Sunderland was involved in the first attempted hijacking of an RAAF aircraft on 14 September 1944. The aircraft had been tasked with flying prisoners, including US Military prisoners, from Cooktown to Port Moresby. One of the American prisoners being transported to the aircraft onboard a launch seized a gun from one of his guards then disarmed the other guards. When the boat reached the Sunderland he tried to persuade the prisoners embarked on the plane to assist him, but they were unwilling. The boat then preceded to a jetty in Cooktown Harbour where the man was persuaded to surrender. No. 40 Squadron suffered its only loss on 28 November when a Sunderland struck a post and sank after landing at Townsville; there were no fatalities.

The squadron occasionally performed other tasks in addition to its regular transport fights. On 9 March 1945 one of its Sunderlands landed on a small lake in an isolated area of New Guinea to relieve an Army garrison force. No. 40 Squadron also undertook air sea rescue duties on several occasions. On 20 March 1945 a Sunderland located the survivors of a crashed C-47 and dropped them a dinghy. The Sunderland rediscovered the survivors the next day after contact was lost with them overnight, and maintained position over the dinghy until Allied naval vessels reached it.(1)

Late in the war its complement was increased by the addition of four Martin Mariner flying boats.  These were re-purposed USN aircraft and they were not without their problems.  One suffered an engine failure on its delivery flight;  with only two engines beyond the 'Point of No Return' that was a major concern, but the crew nursed it to Australia.  The Mariners only served in two units (the other being 41 Squadron) and while it gave good service in the USN and Coast Guard, they never really made much of a mark in RAAF service (they were very well worn on receipt) and they were quickly retired.

No. 40 Squadron was allocated Catalina aircraft in January 1946 but none were ever delivered.  No. 40 Squadron moved to RAAF Base Rathmines (Lake Macquarie) on 6 March 1946 and was disbanded there on 19 June 1946.