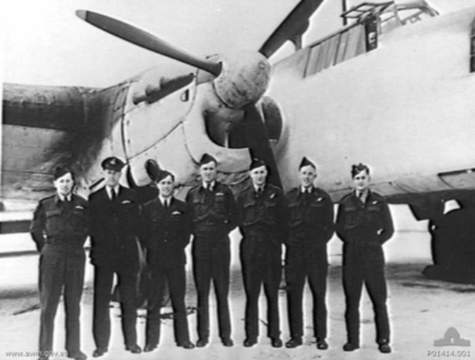 No. 612 squadron entered the Second World War as a General Reconnaissance unit within RAF Coastal Command, flying with the Avro Anson at the start of the war.  These were replaced from November 1940 with Armstrong Whitworth Whitleys, and from November 1942 on these gradually made way for various marks of specially adapted General Reconnaissance (GR) versions of the Vickers Wellington, which the squadron continued to fly until the end of the war.   These aircraft were equipped with a variety of Anti Submarine equipments inclduing the Leigh Light , a powerful searchflight that facilitated night attacks on German U Boats running on the surface to charge batteries and make better transit speed,   using radar to get into position for an attack.  The squadron disbanded on 9 July 1945 at RAF Langham.  Royal Air Force Langham or more simply RAF Langham was a former Royal Air Force station, located 27.2 miles North-West of Norwich, Norfolk, England, from 1940 to 1961. The airfield was the most northerly of the Norfolk wartime RAF airfields and its position, being just 3.3 miles from the North sea at Blakeney put it clsoe to the North Sea.