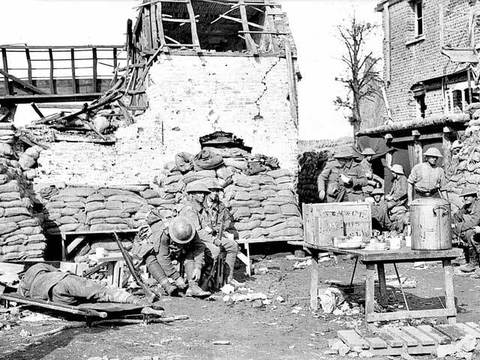 The 11th Field Ambulance was the Field Ambulance Company that nominally supported the 11th Brigade of the Third Division, comprised of the 41st (Qld) 42nd (Qld) 43rd (SA) and 44th (WA)  Battalions.  Field Ambulances were however under command of the Division HQ rather than the supported Brigade.

This synopsis published by the 11th Field Ambulance Association:

11th Field Ambulance, Australian Army Medical Corps, was officially formed at Mitcham, South Australia on 1 March 1916 and became an integral part of the Third Australian Division. LTCOL M. H. Downey was appointed as the Commanding Officer (10 Feb 1916 – 25 Oct 1917), much to the satisfaction of the men. He would later be recommended for a Distinguished Service Order (DSO) for his administration and conspicuous ability as a leader whilst the Commanding Officer of 11th Field Ambulance.

Once raised the unit commenced training in the hills to the south of Mitcham. This training was to prove remarkably valuable, as the terrain was very similar to that which the unit would soon encounter in France.

The unit embarked for England in four groups on different ships, the Suevic, Berrima, Wandilo and the Afric between 31 May 1916 and 30 June 1916. The first group arrived at Plymouth on 21 July 1916 and the unit was united at Salisbury Plain (Lark Hill Camp) for further training. The Unit spent four months in the Salisbury Plains area where they had the most pleasant time ever experienced in the history of the Unit. On the 24 November 1916 the unit embarked at Southampton for France. On this cold, wet and depressing day the unit was on its way to the Western Front only eight and a half months after being raised in balmy South Australia.

On reaching Le Harve they entrained for the forward zone on the afternoon of the 26th, three days later they disentrained at Bailleul on a miserably cold night and the place was knee deep in mud. The unit then route marched for two and a half days before they eventually took over the Divisional Rest Station at Steenwerck. This station would become historic in the annals of the Ambulance, as it was the first station that they administered in France. Secondly on account of the amount of pioneering work that was accomplished to make the place worthy of its name; thirdly it was here they spent their first two Christmases in France.

From here the unit undertook various duties in support of the Third Division. These duties included running sector medical posts and stations, operating Advanced Dressing Stations and running rest areas. The unit first casualties occurred while in the Le Bizet sector, when the enemy shelled the Advanced Dressing Station. Two cooks were badly wounded, one succumbing to his wounds a few days later on 7 April 1917.

During it’s time on the Western Front the Ambulance was involved in numerous areas and sectors including, Ploegsteert, Messines (No carry was under two miles over shell-churned and trackless ground), Charing Cross (in this area doctors and personnel were also compelled to work with gas marks on), Ypres (Broodseine Ridge, Passchendaele and Flanders Ridge), the Somme and Villers Bretonneux. The casualties were numerous, and the bearers had a very strenuous task evacuating them from the various posts.

During these offensives the Commanding Officer, LTCOL R.W. Chambers, (26 Oct 1917 – 15 Sep 1918) was awarded a DSO for his close attention to detail, and his fearlessness in the presence of danger.

In the final stages of the war the Ambulance was involved in the last Somme operations in 1918. The then Commanding officer LTCOL H.B. Lewers (13 Sep 1918 – 11 May 1919) was received the award of the “Order of the British Empire” (OBE) for the following reasons. “During the attack on the Hindenburg Line, 29 September, 1918/1 October, 1918, Colonel Lewers was able to effect the prompt evacuation of an unexpectedly large number of American casualties in addition to those of his Division by the exercise of his untiring energy and power of initiative.”

From the time of its first casualty in April 1917 to the cessation of hostilities the unit experienced 19 killed in action, 56 wounded in action. As well as 41 men were gassed of which one subsequently died, so for a period of just under two years active service the unit had 116 casualties.

The unit returned to Australia and was demobilized in 1919.

They may have had a number of means to assist in casualty evacuation from light rail, horse drawn vehicles and even motor vehicles. Or they could indeed also be stretcher borne, or on hand drawn carts.