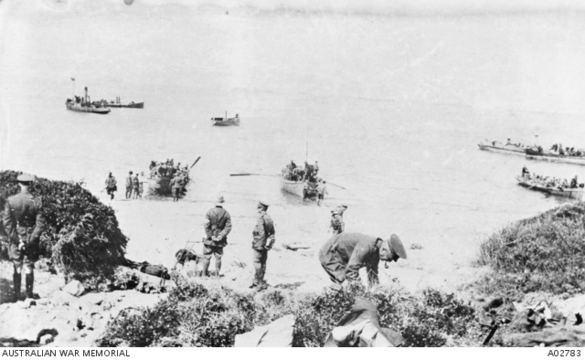 The Division Signals Company was tasked with providing communications from the Headquarters to those of subordinate formations. In the case of 1 Division, this meant the 1st (NSW) 2nd (Vic) and 3rd (outer states) Brigades and Division units (Artillery, Engineers, Pioneers, MG Battalions and Services etc). This would be by a combination of telephone (requiring the laying of line) and limited radio towards the end of WW1.

At various times homing pigeons and motorcycle despatch riders were also used. On Gallipoli, horses were also used for this high risk task.  Line was buried where possible but it would often be cut or broken by artillery fire. Then it would have to be surface laid to maintain communications. Laying line was one of the most hazardous jobs in the front line. The "Linies" had to move above ground carrying a reel of wire. They could often be the only moving thing on the battlefield and thus attracted fire - both small arms and even artillery fire. Hence the task was often performed at night, with the added risk of getting disorientated on the battlefield. The "linies" also had the unenviable task of locating and repairing breaks in the line.

"Power buzzers" were also deployed forward to boost the signal being borne by the line. Later when radio began to appear, signallers would have to erect antennas / aerials, often exposing themselves to enemy observation and fire in the process. As antennas are invariably associated with Headquarters they would also attract the unwelcome attention of enemy artillery Forward Observers unless concealed.