No. 87 Squadron (RAF) Maximus me Metuit - "The most powerful fear me" 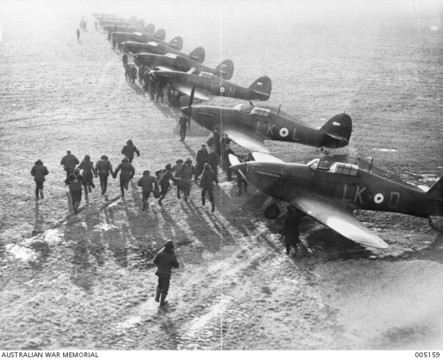 "Maximus me Metuit" "The most powerful fear me"

No. 87 Squadron was reformed in March 1937 from its Great War origins, as a fighter squadron, equipped with the Hawker Fury and then the Gloster Gladiator, before receiving Hawker Hurricanes in July 1938.

No. 87 Squadron was committed to France as part of the British Expeditionary Force, and faced the "Blitzkrieg" onslaught after the 'Phoney War' which had followed the outbreak of War when France and Britain declared war on Germany following its invasion of Poland.

Initially based at Lille on the French Belgian border, in the face of the German onslaught it it withdrew to Merville on the Normandy coast and then four days later across the Channel to Debden.  It then relocated to Yorkshire where it received new aircraft.

In July the squadron moved to Exeter, from where it fought on the western flank of the Battle of Britain.  Later, as the Blitz transitioned to night attacks, No. 87 Squadron was re-tasked, specialising in night fighting, although without much success .  It wasn't until the arrival of twin-engined two-crew radar-equipped night fighters such as the Beaufighter and Mosquito that the night fighters started to enjoy success.  By the spring of 1941 more suitable night fighters were available, and in March the squadron re-tasked once again and began to fly intruder missions over occupied France ('leaning over the Channel').  These missions were also known as "Rhubarbs".  This new role lasted until the end of 1942.

In January 1944 the squadron began to take part in offensive sweeps across the Balkans, based in Italy.  In June it moved to Foggia. In August the squadron began fighter-bomber operations, supporting the fighting further uop the Italian peninsula. It continued in this role until the end of the war. The squadron was based at Treviso for most of 1945, before being disbanded on 30 December 1946.