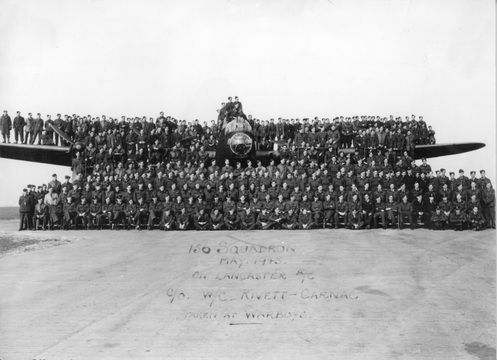 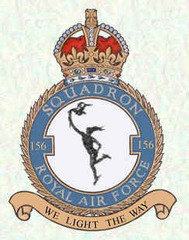 No 156 Squadron "We Light the Way" Pathfinder Force

No.156 Squadron was a bomber squadron that was a founder member of the Pathfinder Force, serving with it from August 1942 until the end of the war.

No. 156 Squadron is included as one of the many RAF units to which a majority of Australian aircrew were posted during WW2, under the Empire Air Training Scheme, and in which they served fought and often died.

The squadron formed on 14 February 1942 at Alconbury, around a detachment from No.40 Squadron. The squadron operated Wellington bombers as part of Bomber Command's main force from then until August 1942, taking part in the first 'Thousand Bomber Raid' on Cologne on 30/31 May of that year.

In August 1942 the squadron become one of the four founding members of the Pathfinder Force, No.8 Group. Originally this force contained one squadron for each of the main types of bombers in use (Wellington, Stirling, Halifax and Lancaster). No.156 Squadron retained its Wellingtons and used them to lead the main bomber force to its targets.

The Pathfinder Force relied on precise navigation to place their aircraft over the target in order to mark it using combinations of flares for the Main Force aircraft following behind, in order to ovecome inaccuracy that plagued early night bombing efforts, using techniques pioneeed and advocated by Group Captain (later Air Vice Marshal) Donald Bennet, CB, CBE, DSO an Australian who had transferred to the RAF in the early 1930s and later undertook pioneering trans -Atlantic mail flights pioneering air to air re-fuelling and precise air navigation.  Rejoining the RAF at the outbreak of war after establishing the Trans Atlantic Fery sevice to bring new aircraft from North AMerica to Britain he was appointed Commander 8 Group.

Later in the war, the Pathfinder Force would be equipped with a range of newly developed and often highly effective electronic aids, but the initial object was to simply take experienced crews with standard equipment and hone their navigation skills.  Targets were marked using arrays of coloured flares.

No. 156 converted to Lancasters in January 1943 and the squadron continued to perform its pathfinder role until the end of the war. After a period of trooping flights and POW repatriation duties it was disbanded on 25 September 1945.