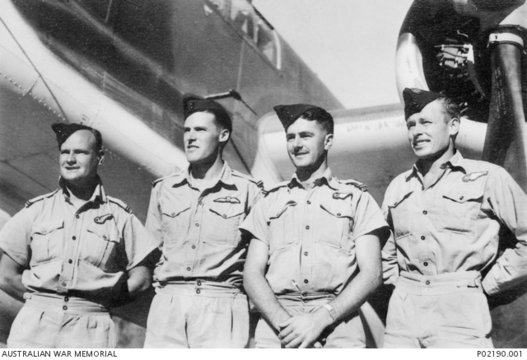 Having existed as a Training unit in WW1, No. 7 Squadron was subsequently disbanded but was re-formed at RAAF Station Laverton, Victoria, on 27 June 1940.

It was originally intended to equip the squadron with Lockheed Hudson aircraft, but insufficent were available. The squadron was re-formed in January 1942 as a Hudson Operational Training Unit responsible for preparing aircrew for posting to other squadrons.

Commanded by John Balmer (/explore/people/618914), the squadron undertook several convoy escort flights and anti-submarine patrols along the Australian eastern seaboard.  In early June 1942, one of the squadron's aircraft located and attacked a Japanese submarine, possibly damaging it.

Shortly afterwards, the majority of the squadron was absorbed into No. 1 Operational Training Unit (1 OTU) at Nhill in Victoria.  In August 1942, what remained of the squadron moved to Nowra, New South Wales, where it was re-equipped with DAP-built Bristol Beaufort medium bombers and began training to operate in the bomber-reconnaissance role. The squadron completed its training in October and moved to Ross River near Townsville, Queensland, and later to Horn Island at the tip of Cape York, where it undertook convoy escort patrols over Australia's northern waters.

During these operations, the squadron's aircraft damaged another Japanese submarine, shot down two Japanese Aichi E13A "Jake" seaplanes and damaged several others.

The squadron was based at Horn Island, Queensland until October 1944, when it moved to Tadji, Papua New Guinea. From November 1944 until the end of the war, the squadron flew strike missions against Japanese positions in New Guinea in support of the Australian 6th Division. The squadron also participated in rescue operations for aircrew that came down behind Japanese lines.

No. 7 Squadron was disbanded at Tadji on 19 December 1945. During the war, 33 personnel from the squadron were killed in action or died on active service.