No. 9 Squadron (RAF) "Per noctem volamus (We fly through the night)" 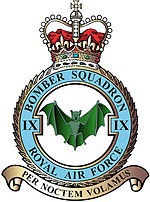 For a full description of this one of the longest continuous service RAF Squadrons, see this 9 Squadron Wikipedia article (en.wikipedia.org):

Raised and disbanced twice in WW1, No. 9 Squadron was re-raised in the inter-war years and in 1939 was equipped with Wellington twin Engined bombers, just the third RAF Squadron to receive them.

It began operations immediately on the outbreak of WW2.,  On 4 September 1939, the squadron’s Wellingtons and crews were the first to hit the enemy flying out of RAF Honington.  The Wellington later gave way to the Avro Lancaster, with which the unit completed the war.  It was based in the latter stages of the war at RAF BARDNEY - 14th April 1943 until 6th July 1945.

No. 9 Squadron flew as part of RAF Bomber Command in Europe all the way through the Second World War, took part in all the major raids and big battles, pioneered and proved new tactics and equipment, produced several of the leading figures in The Great Escape, as well as Colditz inmates

No. 9 Squadron became  they became one of the two specialised squadrons attacking precision targets with the 12,000lb blockbuster Tallboy bomb, the other squadron being the legendary 617 'Dambusters'.  No. 9 Squadron led the final mainforce raid, on Berchtesgaden, 25 April 1945.

Its most famous mission was the sinking of the German battleship Tirpitz, sister ship of the Bismark lost in 1941.  Tirpitz had been moved into a fjord in Northern Norway from where she threatened the Arctic convoys to Russia, but was out of range of an attack from the UK.

The Tirpitz had earlier been  damaged by a Royal Navy midget submarine attack and a second attack from carrier born aircraft of the Fleet Air Arm, but was still afloat.   They had failed to sink her. The task was given to No. 9 and No.617 Squadrons who, operating from a base in Russia, attacked the Tirpitz with Tallboy bombs which damaged her so extensively that she was sent to Tromsø Fjord to be used as a floating gun battery.

Tromso was in range of bombers operating from Scotland. Finally on 12 November 1944, 9 and 617 squadrons attacked the Tirpitz again. The first bombs missed their target, but following aircraft scored three direct hits in quick succession causing the ship to capsize.

The Squadron has continued in existence continuously since WW2 operating aircraft from the Avro Lincoln, English Electric Canberra, Avro Vulcan, to the Panavia Tornado.  It flew in action during Gulf War 1 and 2 in 1990 and 2002-3, in Afghanistan and against Libya in 2011.