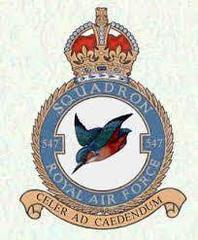 No. 547 Squadron was formed at Holmsley South on 21 October 1942, as a unit of Coastal Command equipped with Wellingtons. Initially it was trained as an anti-shipping squadron equipped for both bombing and torpedo-dropping but in May 1943 it was re-allocated to anti-submarine duties, beginning patrols from south-west England in June.

At the end of October 1943, crews began conversion to Liberators and patrols over the Bay of Biscay continued with this type. In September 1944 the squadron moved to Scotland, where patrols were mixed with attacks on enemy shipping off the Danish and Norwegian coasts until the end of the war. On 4 June 1945, the squadron was disbanded.