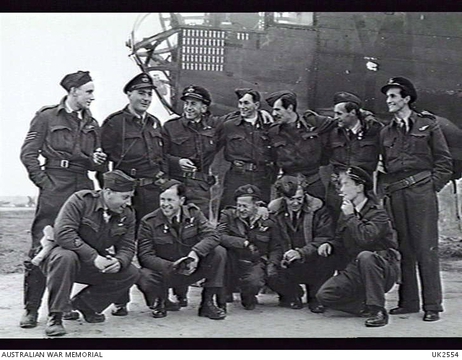 No. 226 Squadron is included on this site as one of the many RAF Squadrons to which RAAF pesonnel were assigned as individual reinforcements after training in the Empire Air Training Scheme, throughout WW2, and in they served fought and tragically often died.

No. 226 Squadron was formed on 1 April 1918 at Taranto, Italy, from  No. 66 Wing of the Royal Naval Air Service, for reconnaissance and bombing of Austrian bases on the Adriatic coast and anti-submarine patrols. A month was spent in the Aegean attacking Turkish targets before the squadron returned to Italy for disbandment on 18 December 1918.

No. 226 Squadron reformed at RAF Upper Heyford on I5 March 1937. In October, the squadron re-equipped with Fiarey Battle single engined light bombers, as part of the Advanced Air Striking Force.  The Squadron was sent to France shortly after the outbreak of war in September 1939. Here the squadron flew ground attack missions, against the advancing Wehrmacht.  The Fairey Battle was no match for its opposition primarily Messerschmitt BF 109s and 110s, and the Battle Squadrons lost heavily.  The unit was evacuated from Brest in Brittany on 16 June 1940.

the Battles that were left were were withdrawn from Operational Service and relegated to training functions.  After re-assembly in Northern Ireland,  No 226 Squadron converted to Bristol Benheims in February 1941.  In May of 1940 the Squadron moved to Suffolk to mount daylight attacks on North Sea ports and shipping.  Sadly the Blenheims proved to be little better than the Battles and also sustained heavy casualties.  No 226 Squadron converted to the Douglas Boston (A20 Havoc in US service)  in November 1941.  These were faster, better armed and carried a heavier bombload and were realtively successful.

The Squadron 'upscaled' further, converting to the excellent North Amercian B25 Mitchell medium tactical bomber in May 1943.

Reassigned to the Second Tactical Air Force, the squadron made daylight raids on airfields and communications targets in preparation for the invasion of France. In October 1944 No 226 Squadron moved to Vitry en Artois near the city of Arras in northern France, carrying out strikes against the retreating Nazi forces.  The Squadron again relocated to Holland where it disbanded on 20 September 1945.

Post war, or rather during The Cold War, in August 1959, No 226 Squadron reformed at RAF Catfoss to operate Thor ballistic missiles, disbanding on 9 March 1963.

Compiled by Steve Larkins from a variety of sources Oct 2020