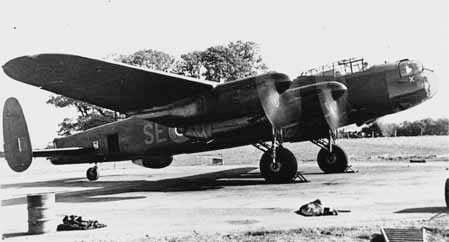 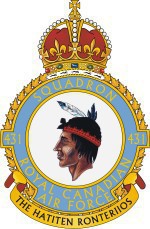 This unit is included on this site because it was one of the many British and Dominion squadrons, many created under Article XV of the Empire AIr Training Scheme, *and denoted by a 400 series number) to which RAAF personne were posted and in which they served fought and died over NW Europe during WW2.

Initially formed at Burn near Selby on 11th November, 1942, No. 431 Squadron was a bomber unit with No. 4 Group flying Wellingtons. Any aircraft that carried markings beginning with "SE" indicated the plane belonged to 431 Squadron. The squadron crest featuring an Iroquois Native's head, the motto reading "The Hatiten Ronteriios" ("Warriors of the Air").

After being stationed briefly at Tholthorpe where the squadron was outfitted with the Halifax, 431 Squadron was transferred to Croft in December of 1943. The squadron remained in Croft for the remainder of World War II and was equipped with Lancasters at a later point. Over the course of the war 431 Squadron completed over 3000 operations across the European Theatre. Minnie Simcoe, a handcrafted doll that soon became the squadron's mascot, accompanied many crews as a good luck charm.