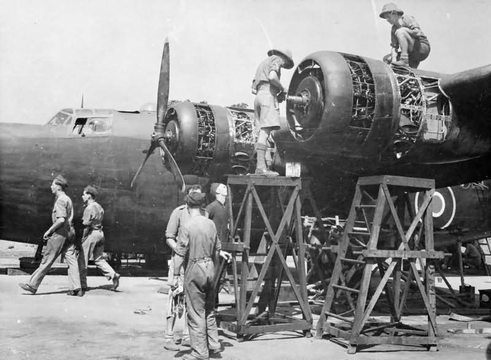 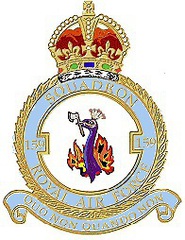 For the purpose of this website, No. 159 Squadron (RAF)  is included as one of the RAF Squadrons to which Australians were posted during WW II and in which they served fought and died

The Empire Air Training Scheme supplied tens of thousands of aircrew for the Royal Air Force (RAF) air war in Europe, and later in other theatres of war, during WW II. While a number of so-called Article XV national squadrons were created in Fighter, Bomber and Coastal Commands of the RAF, the majority of Australian aircrew were posted, along with their Commonwealth colleagues, to RAF Squadrons as individual crew members,where they would 'crew up' often with a very multi-national aircrew comprised of men from all over the Commownwealth. Ground staff were similarly assigned.

Following is an extract from the Wikipedia entry for this unit.

No. 159 Squadron was reformed at RAF Molesworth on 2 July 1942 during the Second World War and its ground crew personnel were posted, without aircraft, to the Middle East on 12 February 1942 and then to India on 18 May 1942. Flying B-24 Liberators, the squadron was posted to Palestine in July 1942 and carried out bombing raids in North Africa, Italy and Greece. No. 159 then flew to India on 30 September 1942. The first operation against the Japanese was on 17 November 1942, and during the rest of the war, the squadron flew mine-laying, bombing, and reconnaissance missions over Burma, Siam, Malaya, Indo-China and the Dutch East Indies.

In October 1944, the Squadron mounted an audacious minelaying raid on the Japanese held port of Penang. The mission entailed a round trip of over 3,000 miles, which at the time was the longest distance bombing raid in history. Eric Burchmore was in charge of the modification and preparation of the Consolidated Liberator aircraft used for the mission. The raid was led by Wing Commander James Blackburn and was a complete success, with the port of Penang completely blocked by mines and all of the aircraft and crews returning safely. Burchmore was awarded a military MBE in recognition of his contribution to the operation, whilst Wing Commander Blackburn was awarded a Bar to his DSO and was also awarded the American DFC by the United States Air Force.

After the war, No.159 converted to transport and survey duties before disbanding on 1 June 1946.