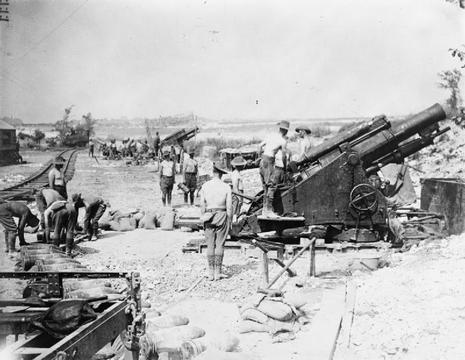 The 36th Australian Heavy Artillery Group served in England, and on the Western Front

It was organised in two batteries, equipped with 8 inch Howitzers and 9.2 inch howitzers respectively - the 54th and 55th.  Each battery initially had four guns; this was later increased to six.

These were the heaviest guns operated on a continuous basis by Australian gunners in WW1 (and subsequently).  Heavy artillery was designed to pulverise enemy defensive positions.  By and large German defences were constructed very well indeed, and the onus was on the Allies to attack them to retake ground occupied by the Germans in 1914.  German defences often comprised concrete blockhouses and deep underground concrete dugouts which were impervious to Field Artilley.

Big guns were a prime target for opposing artillerymen who would seek to apply counter battery fire to enemy gun positions.  Locating them accurately was a story in itself.  In the end it was the British who triumphed thanks largely to the work of Adelaide-born (later Professor and 1915 Nobel Prize winner) Captain Lawrence Bragg, serving in the Royal Artillery.  He and his team developed a surprisingly accurate technique based on sound ranging that gave the Allies a decisive advantage being able to locate enemy heavy guns with remarkable accuracy.  It was a decisive factor in the Aliied victory on 8th AUgust 1918 at the Battle of Amiens.

Gunners have four defensive measures;  distance from the enemy, concealment, protection in the form of dugouts and bunkers, and mobility.  As far as range was concerned,  soldiers have a saying;  "if the enemy is in range so are you".  At least with heavy guns, they are generally beyond the range of Field Artillery.  Concealment? When one of these guns went off, the entire neighbourhood knew it;  at night the muzzle flash was prodigous, so notions of concealment were therefore moot. Once firing began the best protection is to be part of a massed barrage.  Mobility is a misnomer in the case of most heavy artillery; it is certainly relative.  The 9.2 inch Howitzers were not mobile - they could not easily be redeployed without time and lifting equipment.  Protection?  Defensive earthworks would not sustain a direct hit by enemy heavy artillery.  Nor could they prevent enemy infantry attacking if they ever managed to get close enough (which they did during the Battle of Cambrai in 1917).  In short, being a gunner was not without risk.

The Australian Heavy Batteries served on the Western Front largely detached from the rest of the AIF.  They spent relatively little time on the Somme.  Most of their service was rendered further north around Arras and Vimy in France and into Flanders, as part of British Corps Artillery.  The Heavy Batteries were manned at the outset with soldiers from the permanent force Garrison Artillery, later augmented by reinforcements from the militia.

Napoleon Bonaparte famously described Artillery as "the God of War" because of the effect that its fire can bring to bear on the battlefield.  In WW 1 on the Western Front, artillery dominated and defined the battlefield. In concert with the weather, it turned the terrain into the pulverised devastated quagmire that is so synonymous with that period and place.

The standard organisation of Field Artillery took on the form of the Field Artillery Brigade (FAB) which were formed to support infantry Brigades. In 1914 and 1915 the First and Second Division each had three brigades (initially corresponding to the Brigade numeric designation) equipped with 12 x 18 pounder field guns.  On arrival in France, the artillery was reorganised with each field artillery brigade having 12 x 18 pounders and 4 x 4.5 inch howitzers. There was initially a lack of howitzers available to meet the establishment.

Each Brigade generally comprised three Batteries of four 18 Pounder Mk 1 or II guns. With a range of about 6,500 yards (almost 6km) they fired a range of ammunition natures including High Explosive fragmentation, Shrapnel, Smoke, Gas, Star (illumination) and Armour Piercing projectiles.  The incorporation of a box trail in later Marks added 50% to their range.  For the record, most gas used in WW1 was fired from specialised low velocity projectors operated by Engineers.  The 4.5 inch Howitzer began to be introduced from 1916 and rendered sterling service into WW2.  It fired a 16kg/35lb shell to a mximum of 6700m.

However, these guns did not have the power required to disrupt major defensive positions.  Heavier weapons were required.  So the Heavy and Siege Artillery batteries were formed, using the massive 9.2 inch fixed position Howitzers and the 8 inch wheeled Howitzers.

As the war progressed, concentration of became the name of the game to facilitate command and control at the highest level.  The FAB were consolidated increasing the number of guns per Battery to six and adding a Howitzer Battery, and reducing the number of headquarters to save on key personnel.  Siege Artillery, Heavy Howitzers and Medium and Heavy Mortars were added to the mix at Division level or higher.  The allocation of their fire support was managed accordingly. See the entry for Divisional artillery for further information.

(c) Steve Larkins November 2014. Steve was a one-time Infantry Mortar Line Officer and later a student of the Royal Military College of Science in the UK.