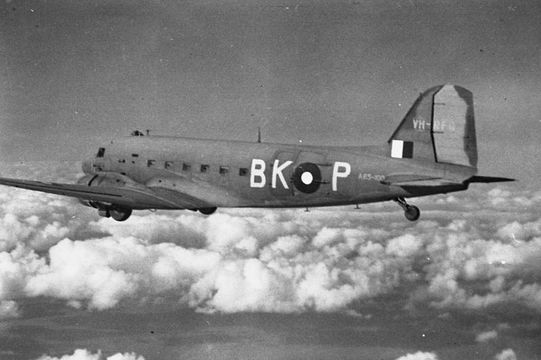 Later in the year, the squadron was augmented with an assortment of aircraft including de Havilland Moth Minors, Fairey Battles, de Havilland Tiger Moths, an Avro Anson, a de Havilland Dragon Rapide and a Northrop Delta.   In August 1943, the squadron was moved back to Pearce, where it was re-equipped with the ubiquitous transport workhorse of WW2 the C-47 Douglas Dakotas.  These allowed operations Australia wide.

During 1943-4 the squadron provided air transport to the Australian military throughout the South West Pacific area, operating out of Guildford, Western Australia, Brisbane, Queensland, and Cape York.

Towards the end of the war, detachments operated out of Darwin, Northern Territory, Townsville, Queensland, and later Morotai Island, which became the hub of Australian operations in what was then the Nethelands East Indies.

Following the Japanese surrender in August 1945, No. 35 Squadron flew Australian soldiers and ex-prisoners of war home. In early 1946, it supported the movement of No. 81 (Fighter) Wing to Iwakuni in Japan as part of the British Commonwealth Occupation Force. The squadron was disbanded at Townsville on 10 June 1946.

35 Sqn marked their airframes in an unusual manner by carrying the 'last 2' of the ADAT radio call sign just behind the cockpit ) or on Nat Metal airframes below the cockpit,and rarely appear to have applied their Sqn codes 'BK' to their C-47s although the main image depicts it thus.  Serials were in the usual Light Grey on the rear fuselage. The 'VHxxx' radio call signs were applied in their usual position above the fin flash (or sometimes on the rudder). They could be variously in Light Grey, White, Black (on natural metal airframes) or even Sky Blue. They could also be with or without a dash after the 'VH'

It was re-raised for service in Vietnam on 1 June 1966, subsuming the RAAF Transport Flight Vietnam (RTFV).  It is the subject of a separate listing HERE.