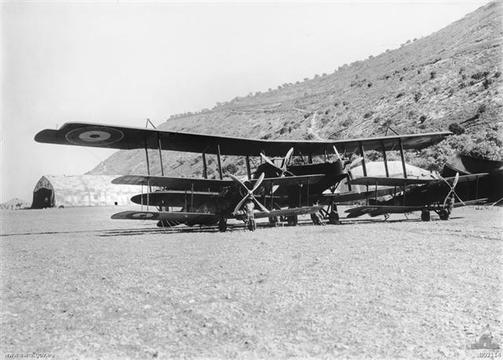 Information and History of No. 1 Squadron , Australian Flying Corps

History Information
Following an invitation from Britain to the dominions to form complete flying squadrons for service with the British forces, the first squadron of the Australian Flying Corps (AFC) was formed at Point Cook in Victoria in January 1916. It sailed from Melbourne on 16 March, and arrived in Egypt on 14 April. The squadron's less experienced pilots were sent to the United Kingdom for further training, while other personnel were attached to the Royal Flying Corps to further hone their skills. Upon joining the British forces in Egypt the squadron became known as 67 (Australian) Squadron, Royal Flying Corps (RFC), and would not revert to its original name until 19 January 1918.

The squadron began flying operations in its own right on 12 June 1916, although its three flights operated independently from dispersed airfields. Initially the squadron's main role was aerial reconnaissance and its aircraft operated both out across the Sinai desert in search of Turkish forces, and across Egypt's western desert to monitor activity by the rebellious Senussi. Increasingly, though, its aircraft were involved in attacks against Turkish ground forces.

After being reunited in December 1916, the squadron supported the British and dominion advance into Palestine. It became a "jack of all trades" carrying out reconnaissance, photography, ground attack and liaison missions, in addition to having to fight off aggressive German adversaries. For his actions following an attack on the railway line at Tel el Hesi, near Gaza, on 20 March 1917, Lieutenant Frank MacNamara was awarded the Victoria Cross. During the raid one of McNamara's comrades was forced down and, despite being wounded himself, McNamara landed to rescue him from beneath the guns of a Turkish cavalry unit.

With the arrival of new aircraft in the second half of 1917, the British and dominion air forces were able to gradually wrest control of the air from the German squadrons. This allowed them to range over Turkish territory with virtual impunity and airpower contributed greatly to the success of British and dominion operations in 1918, particularly the last great offensive of the campaign, launched with the Battle of Megiddo on 19 September 1918. The Turkish forces surrendered on 31 October. Addressing the squadron after the Armistice, General Sir Edmund Allenby, the British Commander-in-Chief, congratulated it for its role in the victory:

This squadron played an important part in making this achievement possible. You gained for us absolute supremacy of the air, thereby enabling my cavalry, artillery and infantry to carry out their work on the ground practically unmolested by hostile aircraft. This undoubtedly was a factor of paramount importance in the success of our arms here.

1 Squadron returned to Egypt in February 1919, embarked for home on 5 March, and was disbanded upon its arrival in Australia.