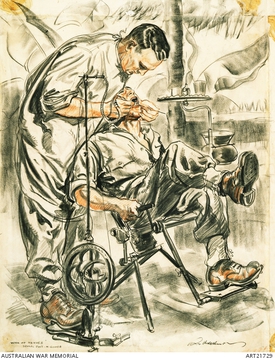 Dentistry is a major combat enabler.  Dental problems among military personnel impair capability very quickly.  To that end, dental support was distributed widely across the Army from the Communication Zone to '2nd Line' level.

The pre-war Militia had no Dental units, relying instead on civilian practioners. When the AIF formed, the Australian Dental Association formed a volunteer service which prepared the 6th Infantry Division for deployment.

Dental elements sprang up as part of hospitals convalescent depots and other medical units, but 'Special Dental Units' were formed.  These comprised a Captain Dental Officer, a Staff Sergeant and Corporal Dental Technicians, a Private records clerk and a batman, making them the smallest 'formed elements' in the Army.

In October 1942 they were consolidated into larger Multi-Section Dental Units;