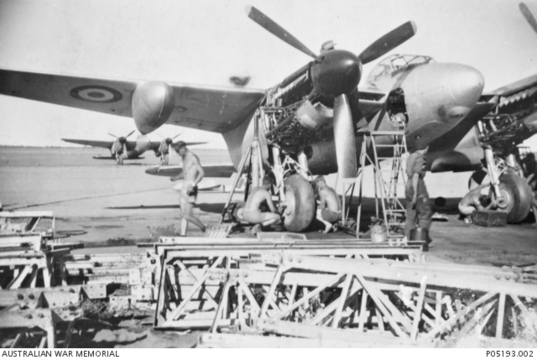 "We See and We Fight"

The squadron was first formed at RAAF Station Laverton on 8 June 1942 as No. 1 Photo Reconnaissance Unit (1 PRU), with eight officers and thirty-five airmen under the command of Squadron Leader L. W. Law, operating six Brewster F2A Buffalos, an aircraft type that had been shot out of the sky in the Malayan campaign at the hands of the far superior Mitsubishi Zero.

Initial training in navigation and aerial photography was carried out at Laverton until 12 August 1942 when the unit began moving to Hughes Airfield, Northern Territory to prepare for operational service.

A Japanese bombing raid on 23 August subsequently resulted in the loss of one Buffalo and a CAC Wirraway. Meanwhile, further training continued in September which resulted in one aircraft and its pilot being lost, while two US P-38 Lockheed Lightnings were received in October. The first operational flights occurred between 10 and 19 November over Tanimbar Island; however, on 20 November a Lightning was destroyed in a crash, killing the pilot.

Four operational flights were completed in January 1943, while reconnaissance of all Japanese aerodromes in Timor was completed in April. In May photo reconnaissance missions were completed over Timor, Tanimbar and Dutch New Guinea. In August aircraft from the squadron located two new Japanese airstrips near Koepang, and confirmed the presence over another one on Roti Island. Meanwhile, Japanese bombers attacked Coomalie on 13 and 20 August 1943; however, neither raid resulted in significant damage. During November the squadron conducted sorties over Timor, Kai, Tanimbar and Roti Island, but bad weather curtailed operations during December.

The unit received its first de Havilland Mosquito aircraft on 26 May 1944, representing a significant upgrade in capability. Between June and August the squadron flew missions over Java, Balikpapan, Biak, the Halmaheras and the Philippines.

On 10 September 1944, No. 1 PRU was re-designated as "No. 87 Squadron RAAF " at Coomalie Creek Airfield in the Northern Territory.  The new squadron was initially equipped with two Wirraways and a Mosquito and was tasked with providing photo reconnaissance support for Allied operations in South East Asia and the Netherlands East Indies. Operating from Coomalie Creek the squadron primarily conducted reconnaissance flights over the eastern islands of the Netherlands East Indies, with occasional missions over Java and other parts of South East Asia. As more Mosquitoes were received the number of missions flown increased.

At the end of the war, No. 87 Squadron continued to conduct flights over Japanese held territory in order to monitor Japanese Army units until they could be disarmed. The squadron moved to Parkes, New South Wales, in October 1945 where it was disbanded on 24 July 1946.

For their service during the war, one member of No. 87 Squadron was made a Member of the Order of the British Empire, four received the Distinguished Flying Cross and seven were Mentioned in Dispatches.

Following No. 87 Squadron's disbandment its Mosquito aircraft were operated as the "Survey Flight" based at RAAF Base Fairbairn. This flight was expanded to full squadron status in November 1946, and then re-designated as No. 87 Squadron on 8 March 1948.

Operating in the photo survey role the squadron carried out many operations to support the Commonwealth Survey Committee and National Mapping Council.  The squadron also became responsible with providing the RAAF with a photo reconnaissance capability in 1949. Following the withdrawal of funding support by the Department of National Development No. 87 Squadron was disbanded at Fairbairn in December 1953.  Its Mosquitos and aircrew had rendered sterling service in the National Interest, and their fate is a story in itself.