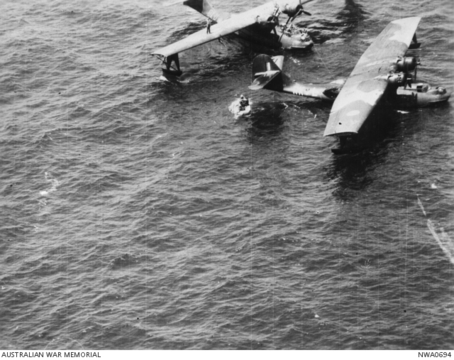 No 42 Squadron was raised in the Northern Territory in June 1944, and shortly after it was fully equipped with the legendary PBY Catalina flying boat aircraft.  It was soon deployed from Melville Bay, and the unit's Catalinas flew reconnaissance and escort missions.

From late 1944, the squadron's role was concentrated on mine-laying operations. Painted black and operating mainly at night, these aircraft undertook patrols covering epic distances behind enemy lines.  The squadron's highly successful mine-laying campaign soon sealed off most of the Celebes from coast-hugging Japanese vessels.  They quickly earned the sobriquet 'Black Cats' a name which sat well with their long solitary patrols.  Together with No. 20 Squadron and No. 43 Squadron they operated under the control of the RAAF's

Training and preparation for Flying Boat operations took place at coastal Rathmines near Newcastle NSW and at inland Lake Boga in Victoria.  PBY Catalina's were in a significant majority but other types were also operated including Short Empire and Sunderland aircraft (see entries for No. 10 Squadron RAAF and No. 461 Squadron RAAF in the UK), Martin Mariners and a number of former Netherlands East Indies Dornier aircraft.

In October 1944, a No 42 Squadron Catalina damaged by anti-aircraft fire made a forced landing south of Japanese-occupied Celebes. Flying through enemy-held territory, a No 41 Squadron Catalina, accompanied by a B-24 Liberator, rescued the crew before destroying the downed Catalina to prevent its capture. A journey of nearly 2,500 kilometres through enemy controlled territory, this mission ranks as one of the epic sea rescues of the Pacific theatre.

In November 1944, a detachment of aircraft was deployed to Morotai in the NEI, which had been captured by Allied forces in mid-September, from where they flew minelaying operations against Brunei Bay, Tarakan, Sandakan and the Balabac Straits. Later in 1944 seven No. 42 Squadron Catalinas were deployed to Leyte in the Philippines from where they mined Manila Bay on the night of 14/15 December.

In January and February 1945 No. 42 Squadron and the other units of No. 76 Wing focused on laying mines off Surabaya and the Laoet Straits.  One of the squadron's Catalinas was forced to make an emergency sea landing on 14 January after being damaged by Japanese anti-aircraft fire (see image), but its crew was rescued by an aircraft from No. 43 Squadron.

From March to May detachments of No. 42 Squadron aircraft laid mines off the coast of southern China and Formosa as part of a No. 76 Wing offensive in this area; these operations were conducted from Jinamoc Seaplane Base in Leyte Gulf in the Phillippines,  with the aircraft refuelling at Lingayen Gulf in Luzon while en route to their targets.

During June 1945, No. 42 Squadron aircraft flying from Jinamoc Island via a refuelling base which had been established at Brunei Bay laid mines off Sumatra while some of its other Catalinas mined Surabaya. Following this, the squadron's aircraft were mainly used to conduct harassment raids on Japanese air bases in south-west Celebes, though they also attacked shipping in the Flores Sea and Banda Sea.

No. 42 Squadron assisted in the repatriation of Australian prisoners of war from Manila and other Australian personnel from Labuan (Borneo) following the Japanese surrender.  The squadron also conducted several reconnaissance flights over Japanese-occupied islands. No. 42 Squadron was disbanded at Melville Bay on 30 November 1945.

During its existence No. 42 Squadron flew 396 operational sorties, during which its aircraft dropped 549 tons of mines and 17 tons of bombs. The squadron also flew 6,330 hours of transport and courier flights.