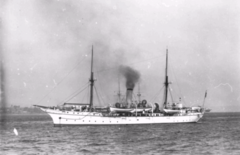 From 1907 until the outbreak of World War I, Fantome was almost continuously engaged on survey operations in Australian waters. She was manned by and commissioned into the Royal Australian Navy as HMAS Fantome on 27 November 1914 and despatched to New Guinea in early December. She returned to Sydney on 21 February 1915. In July 1915 Fantome was armed with two 4-inch and four 12-pounder guns, again manned by the Royal Australian Navy and recommissioned on 27 July 1915.