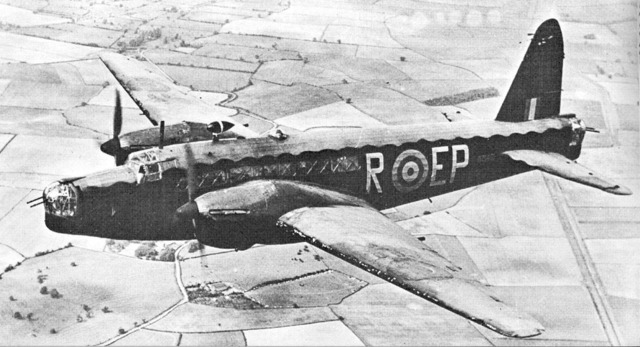 For the purpose of this website, No. 104 Squadron is included as one of the RAF Squadrons to which Australians were posted during WW II, and in which they lived fought and often died alongside other Commonwealth Airmen.

The Empire Air Training Scheme supplied tens of thousands of aircrew for the Royal Air Force (RAF) air war in Europe during WW II. While a number of so-called Article XV national squadrons were created in Fighter, Bomber and Coastal Commands of the RAF, the majority of Australian aircrew were posted, along with their Commonwealth colleagues, to RAF Squadrons as individual crew members, where they would 'crew up' often with a very multi-national aircrew comprised of men from all over the Commownwealth. Ground staff were similarly assigned.

No. 104 Squadron had been raised in WW1 but disbanded after the cessatiobn of hostilities.  On 7 January 1936, the squadron was reformed at Abingdon from the 'C' Flight of No. 40 Squadron. The squadron was equipped with the Hawker Hind biplane light bomber. In August 1936 the squadron moved to RAF Hucknall, followed by a move to Bassingbourn in May 1938, and conversion to the Bristol Blenheim.

After the Second World War began, the squadron disbanded when it was absorbed into No. 13 Operational Training Unit in April 1940.

The squadron reformed again on 1 April 1941 at RAF Driffield, equipped with the Vickers Wellington and began night bombing operations in May as part of No. 4 Group RAF until February 1942.

A squadron detachment was sent to Malta in October 1941, moving to Egypt in January 1942, shortly afterwards the home contingent of the squadron at Driffield was renumbered No. 158, whilst the remainder of the squadron in the Middle East remained No. 104. The squadron later moved first to captured airfields in Tunisia, followed by a move to the Italian mainland in December 1943.

In February 1945 the squadron was re-equipped with the Consolidated Liberator, and then returned to Egypt in November 1945 where it converted to the Avro Lancaster. The squadron disbanded on 1 April 1947.