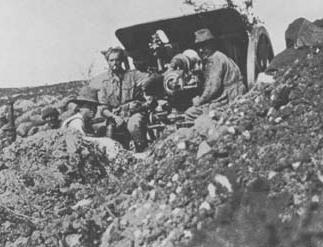 The 7th Field Artillery Brigade was initially raised to support the 3rd Division in February 1916.  It comprised

The orders were struck to raise the 7th Field Artillery Brigade in February 1916 and it formed on 17th March 1916.  It remained in existence until beyond the Armistice on 11 November 1918 until disbanded.  It comprised:

This from the 7th Field Regiment Association web page SEE LINK (7fd-regt-raa-association.com) for a full history of this unit in all its iterations since WW1.

The 7th Field Artillery Brigade, 3rd Division, AIF was formed at the "Warren" a one time convent, in the suburb of Marrickville, NSW on 17 March 1916, under the command of Lieutenant Colonel R. St. J. Pearce, VD. The Brigade comprised Brigade Headquarters, 25, 26, 27 and 28 Field Batteries (each of four 18 pounder guns) and 7th Field Brigade Ammunition Column. The Brigade embarked at Sydney on HMAT Argyllshire on the 11 May 1916. It arrived at Portsmouth, England on 11 July. Training took place at Larkhill, Salisbury Plains, Wiltshire where the 23rd Howitzer Brigade was abolished and 107 Howitzer Battery of this Brigade, with 4.5 inch howitzers, was allocated to 7th Field Artillery Brigade. 28 Field Battery was allocated to a new artillery brigade, the 23rd Field Artillery Brigade.

These additional Brigades (all numbered in the '20s) were later broken up and re-distributed to create 6 guns (rather than 4) to a battery because of a shortage of Battery Commanders.