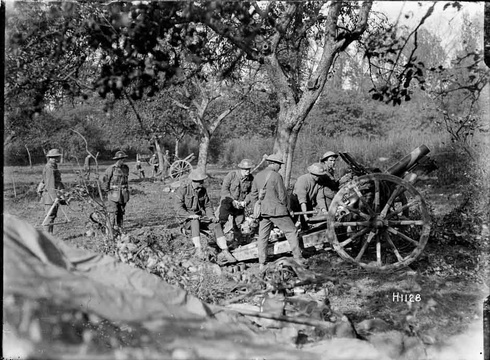 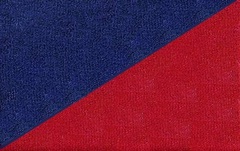 Howitzer Brigades were added to the establishment of Divisional Artillery for the Western Front.  Field guns like the 18 pounder just did not have the destructive power needed to defeat well prepared defensive positions such as German blockhouses and concrete dugouts.  Something more powerful was needed.

A Howitzer Battery was originally raised for each Field Artillery Brigade but in respect of artillery, concentration is the name of the game and it was realised more were required so the Howitzer Brigades comprising 12 x 4.5 inch howitzers were raised; 21 through 25, the second digit indicating the Division to which it was assigned.

The 21st was thus attached to the 1st Division.  It comprised four Batteries;

A howitzer is a relatively short barrelled gun that fires a comparatively heavy shell at moderate velocity on a high trajectory causing the shells to fall steeply or 'lob'  into the enemy positions.  When the shell is fitted with a delay fuze, the projectile will detonate sub-surface which is the desired effect to destroy trenches, dugouts and the like.

When the AIF embarked, its artillery was light-on indeed.  As it turned out the scope to use it at Gallipoli was extremely constrained anyway so it mattered less than had the AIF gone straight to Europe, where artillery was the definitive feature of the battlefield. What was exemplified though was the need for angle fire to attack personnel in entrenched positions.

The standard organisation of Field Artillery took on the form of the Field Artillery Brigade which were formed to support infantry divisions. In 1914 and 1915 the First and Second Division each had three brigades (initially corresponding to the Brigade numeric designation) equipped with 12 x 18 pounder field guns.

On arrival in France, the artillery was reorganised with each field artillery brigade having 12 x 18 pounders and an intended 4 x 4.5 inch howitzers. In March 1916 a fourth battery of four 18 pounder field guns was added.

There was initially a lack of howitzers available to meet the establishment.  At the same time a Howitzer Brigade was raised for each division with 12 x 4.5 inch howitzers each. These were equipped as howitzers became available.

The 21st was thus equipped.  It became the Howitzer Brigade attached to the 1st Division Artillery.