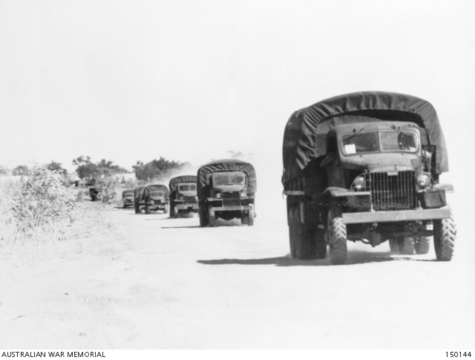 General Transport Companies derived from Field Supply Units, and they worked to transport supply items, including ammunition, between depots.

The history of these units is convoluted and difficult to trace, as the same companies often existed under multiple names.

Their chain of command and reporting relationships also changed. Many also had detachments that worked independently to the main unit. The names of each General Transport Company and their many iterations are listed below, as best we have been able to establish:

For five years the men of the 2/101st Australian General Transport Company helped transport and resupply Australian troops, by driving vehicles, normally 3-ton trucks, in the Middle East and the Pacific theatres during the Second World War. As part of the Australian Army Service Corps (AASC), the company moved stores and personnel, and distributed supplies, rations, and ammunition, serving in Egypt, Palestine, Syria, Australia, Papua, and on Morotai.

The 2/101st was formed in mid-1940 in Marrickville, Sydney, as part of the larger I Australian Corps Ammunition Park. As part of the 2nd Australian Imperial Force, all members of the company were volunteers, many of whom had been members of the pre-war Militia and had served in the 1st Cavalry Division's service corps.

In early 1941 the company transported troops during the Libyan campaign, while in June the company was busy transporting men and equipment for the invasion of Syria, mainly supporting the infantry and pioneer battalions. When the I Australia Corps returned to Australia at the end of 1941 and the start of 1942, the 2/101st stayed in the Middle East with the 9th Division.

By July 1942 the war in North Africa had become critical for the British forces and Germans and Italian troops had reached El Alamein, in Egypt, about 70 miles from Alexandria. As one of only a few AASC companies supporting the division, the 2/101st was busy transporting the division from Syria to Alamein, where it was rushed to the area to reinforce the British forces. From August the company was heavily engaged in building up supplies, in preparation for the major Allied offensive, by transporting food, fuel, and ammunition. Once the battle began on 23 October, the company shuttled troops into position and delivered ammunition. These trips were often made under enemy artillery and small-arms fire. By 4 November the enemy forces were withdrawn and the company moved forward to the area around Tel el Eise station.

Alamein was a great, though bloody, success for the Allies but the 9th Division was needed elsewhere. The 2/101st left Alamein in December and went to Gaza, Palestine, where it participated in the 9th Division's parade on 22 December. In January 1943 the company left Palestine for the Suez Canal and boarded the troopships for Australia.

On its return to home, the company was based at Grovely, Brisbane, before being sent to Port Moresby, Papua, in July. New Guinea's terrain and limited infrastructure made transporting and resupplying the Allied forces by road difficult and much of this work had to be done by air. Many men from the 2/101st volunteered to work as crews on transport aircraft, on C-47 "biscuit bombers" - dropping supplies to the forward units "was a very exciting experience". At the end of May 1944 the 2/101st returned to Queensland, based at Warwick and then Petrie.

In March 1945 the company moved to Morotai, in the Netherlands East Indies (now Indonesia). The Allies used Morotai as a base for the American operations in the Philippines and the Australian operations on Borneo. The 2/101st remained on Morotai until after the end of the war, at which time it returned to Australia.

The 1st Australian Corps Petrol Park embarked in late December 1940 and sailed to Egypt. Here, No. 2 Sub Park served in the North African campaign taking supplies forward. On their return trip they would often carry Italian PoW's or wounded soldiers. When the Greece campaign started the unit was moved overseas to add to its defence. In the defeat of Greece, however, the unit lost or had to leave behind most of it equipment before some elements were withdrawn to Crete and others back to Egypt. The few elements in Crete were later mostly captured.

Thus, No. 2 Sub Park was reformed back in Egypt and continued to operate there for a little while. It was then sent to Syria in aid of the Syrian campaign and was stationed at Nahoriyah in Palestine and then to Hadett in Lebanon.

The 105th AGT Coy embarked on Orcades which departed on the 29th January 1942. The Orcades was a doomed vessel, however, as it chosen to defend the Island of Java after the Fall of Singapore. Onboard was the 2nd/3rd Machine Gun Battalion (/explore/units/367), the 2nd/2nd Pioneer Battalion (/explore/units/603), the 105th AGT Coy and several other small units. These were reorganised into three battalions which fell under the command of Blackforce (/explore/units/369)commander Brigadier A S Blackburn (/explore/people/930).  Given a hopeless an inadequately supported task from the outset, Blackforce was left with no choice but to eventually surrender. Thus, the 105th Australian General Transport Company saw out the rest of the War in PoW camps throughout Japanese controlled Asia.

For the lucky few that weren't PoW's, however, they returned to Australia and eventually formed the 2nd/27th Transport Platoon which was part of the newly formed 2nd/105th Australian General Transport Company. To reflect the original unit’s composition the 2nd/105th AGT Coy was mainly recruited from Victoria. The 2nd/105th AGT Coy stayed in Queensland for most the war, however, in its closing stages was sent to Morotai, Borneo.

At the end of the war the unit was returned to Australia and eventually disbanded with all the men discharged. Those who were PoW's were sailed back to Australia before they themselves were discharged.

As the unit was raised in Victoria the personal who formed the 2nd/105th AGT Coy were mainly Victorian, however, the unit was reinforced by several Queenslander's, South Australian's, West Australian's and New South Welshmen.

For the purpose of the RSL-VWM all personel who served either in the 105th AGT or the 2nd/105th AGT Coy are to be consolidated within this unit.