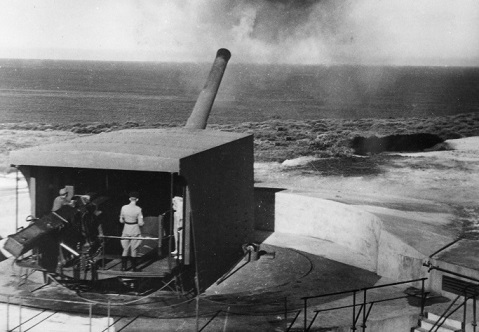 This is a titanic work and WW2 historians owe Graham McKenzie Smith a debt of gratitude.  It has been invaluable in trying to present what was a diabolically complex and frequently re-titled organisation structure, in (we hope) digestible form.

Personnel and their Units

For the purposes of the VWMA, we will be aggregating all personnel known to have been serving in one of the Fortress elements under this generic heading.  Specific reference to the particular installation in which they served may be found in the 'details' section of their service history.

The exception to this 'rule' is that we will be listing the men of the Koepang and Rabaul Batteries with their respective 'Bird Force' groupings because they largely shared the same grim fate as their colleagues.

Prior to Federation and beginning in the 1870s, Colonies had established a network of coastal forts stretching from Thursday Island in the north to Rottnest Island in the west.  Siting and construction had taken place, under the direction of Colonel Peter Scratchley, a noted military engineer and colonial administrator who advocated for, and oversaw the construction of the network of fortifications, coordinated among the Colonies in a remarkable piece of pre-Federation cooperation.  In recognition of his contributioon, the principal Newcastle installation is named after him.

The map below shows the network at its peak in WW2. 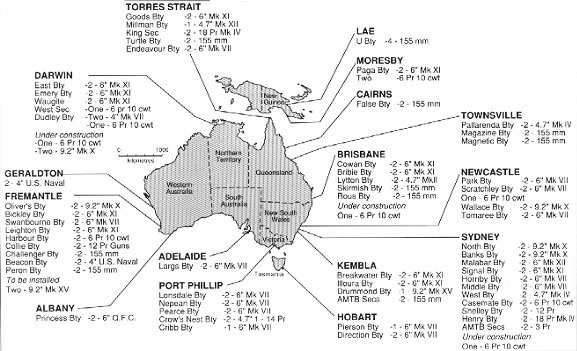 The decision to build them had followed a 'Russian Scare' after the Crimean War.  The Russians maintained a strong Pacific fleet based in the ice-free port of Vladivostok in the NW Pacific.  The perception of need was strengthened considerably, twenty five years after the Crimean War, when the residents of Glenelg (an Adelaide beachside suburb) awoke one Sunday morning in 1882 to be greeted by the sight of a Russian cruiser squadron, bobbing gently at anchor offshore. It was all a harmless error in communications, as the arrival of the squadron, on a 'goodwill' visit (albeit in the era of 'gunboat diplomacy!), had been signalled from Melbourne but an errant postal clerk had failed to pass on the message.  However it heightened the perception of vulnerability of Australia's coastal ports and towns and spurred the need to do something about it.

These fortifications protected the harbours and approaches to major coastal cities and industrial centres. During WW2, additional fortifications were established in New Guinea and adjacent islands.

Two of the fortifications fired their guns 'in anger' and two others were overwhelmed by enemy air attacks.

Fort Nepean (Melbourne) fired Australia's opening shots in both World Wars, to prevent German merchant ships from fleeing Port Phillip Bay on the opening of hostilities.  The barrels of these guns were for many years displayed at the entrance to Fort Nepean, when it was used as the Army's Officer Cadet School (1953-1985). 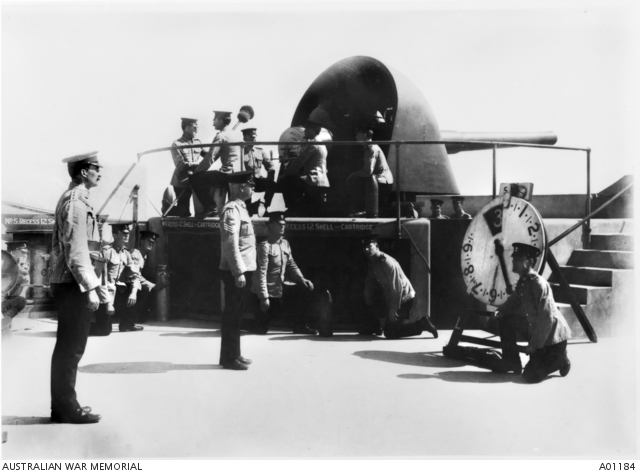 Fig 2. A 6 inch Breech loading gun of the Fort Nepean Battery, the gun that fired the opening shot of WW1, forcing the German merchantman 'Pfalz' to heave to and surrender to Australian authorities. AWM AO1184

Rabaul Battery 'Lark Force' was comprised of 2 x 6inch guns, which had been removed from the Wallace Battery at Newcastle and shipped to and installed at Rabaul.  The Battery was engaged by aircaft ahead of the invasion fleet that preceded the land battle beginning on 25 January 1942.   The coastal defence guns were disabled and the battle saw the Australian defenders vanquished, facing odds of over 5:1.    The personnel of Rabaul Fortress were, like the remainder of Lark Force, killed or captured when Rabaul was taken by the Japanese. A significant number of PoW were murdered in the Tol Plantation massacre and a large number of the remaining PoW and civilian internees (848 POWs and 209 civilians ) were shipped to Hainan but subsequently were lost at sea when the ship carrying them to Japan, the Montevideo Maru, was torpedoed by US submarine Sturgeon en route on 1 July 1942.  It remains the worst maritime event affecting Australians. (http://montevideomaru.naa.gov.au/about/)

Koepang Battery of 'Sparrow Force' in Timor was pt out of action by enemy air attack and the troops manning it took to the hills as Infantry.  Most being captured.

Fort Scratchley (Newcastle) exchanged gun fire with Japanese Submarine I-21 on the night of 8th June 1942.  I-21 had been part of the flotilla that had launched the Midget submarine attack on Sydney Harbour on the evening of  31 May / 1 June 1942.  On the night of 8th June, I-21 surfaced off Newcastle carefully using the Nobbys Lighthouse to mask itself from observation and fire from Fort Scratchley.  The submarine fired 34 pre-prepared shells at the Newcastle docks area at Carrington causing superficail damage.

Fort Scratchley returned fire, getting four rounds away. However hitting a submarine which is very low in the water, at night and moving with only momentary gun muzzle flashes as a reference is challenging in the extreme.

I-21 itself was lost the following year.  Nothing was heard from it after its final report on 27 November 1943 of the Gilbert Islands.  The Japanese submarine fleet suffered escalating losses after mid 1942 largely as a result of codebreaking and electronic intelligence efforts of the Allied Forces. (Ref: Boyd and Yoshida "The Japanese Submarine Force and WW2', 1995 Airlife Publishing UK ISBN1 85310 764 6 pp 210.

When WW2 broke out, most of the Permanent Force personnel transferred to the 2nd AIF.  Many of the pre-war Permanent Force artillerymen  subsequently served in the so-called 'Letter' Batteries.

Fixed Defences were located to protect the ports of all major cities and the industrial ports, and were generally equipped with 'Naval' style 9.2 inch and 6 inch guns of various 'Marks'.  Mobile Batteries of US-sourced 155mm wheeled guns augmented the fixed position defences and were generally manned by 'Letter Battery' personnel.

As the war progressed and the threat of invasion receded, Militia personnel were increasingly drawn away to other functions as the centre of effort moved to the north.  As a result,  many of the fixed defence installations were increasingly manned by Garrison Battalion, Volunteer Defence Corps and Australian Womens' Army Service (AWAS) personnel who were initially 'shadow posted' and cross-trained in Coastal Artillery (CA), Anti-Aircraft (AA) and Searchlight (S/L) battery work.  In addition other components comprising engineers, signals, workshops, medical personnel and AWAS personnel were on-hand to support their operations in clerical, communications and administrative functions such as pay and procurement. 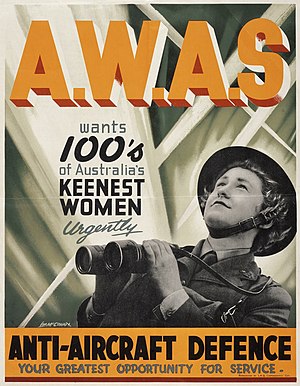 The Command and Control elements of these installations changed titles with bewildering frequency but because of the proliferation of references to 'Fortress' and 'Fixed Defences' in the DVA nominal rolls, we have applied that nomenclature in this case.  They were generally subordinated to the 'Lines of Communication' (LoC) / Military District Headquarters in the region.

The term 'Fortress' is applied to an area or complex rather than to a specific installation and took in all of the elements assigned to the vicinity as part of the coastal defences, and included the Controlling Headquarters, Heavy Gun Batteries, Engineers, Signals, Workshops, Medical and Supply personnel.

Anti Aircraft units were also similarly grouped but because of the sheer numbers of units involved, they are listed in the VWMA separately.   As will be noted, their dispositions were very similar; often overlapping. They can be found HERE (/explore/units/3474)   Similarly some Field and Medium Artillery units were at various times rotated through Coastal Defences, but it was never their primary role and they are listed elsewhere.

A listing  of the Coastal Artillery and related Heavy Batteries can be found at the bottom of this page.

·     Units rotating through included 'M' Bty which subsequently disbanded and its personnel were absorbed into the various locations, 121 Hvy Bty, 9 Hvy Bty (the people moved in and out but the guns remained)

·     Lytton Battery, Lytton – 1 x 4.7in gun a training site including 1 CASL which was integrated into Lytton Bty. 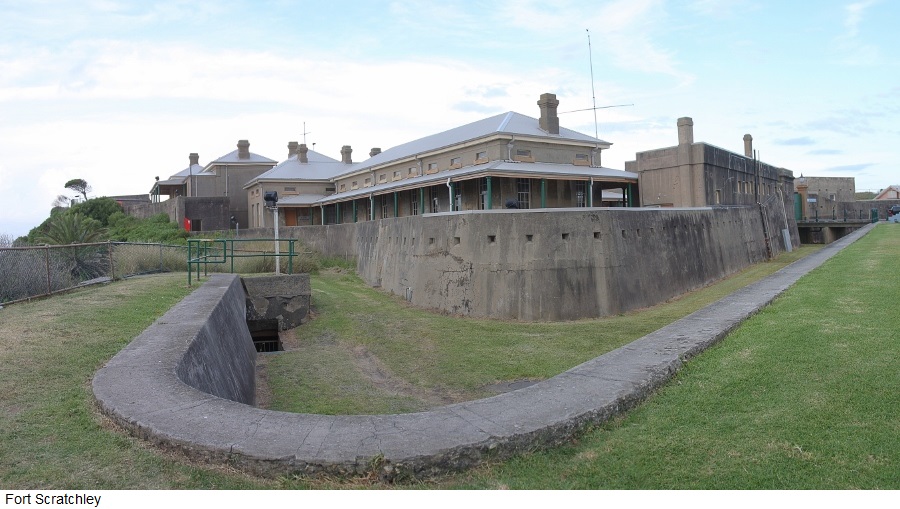 Fig 4. Fort Scratchley from the town side.  Its gun emplacements are beyond the barracks.  They are still fired (using blank cartridges!) on open days and the like.  The Fort is an excellent tourist destination. (https://www.battleforaustralia.asn.au/Fort_Scratchley.php)

Initially the key batteries were combined Militia and Permanent Force personnel manned the guns but from 1943 the Search Light Sections were integrated and the 7th (NSW) Bn VDC progressively assumed responsibility.  In the Botany Bay area 9th and 10th (NSW) Bn VDC assumed this responsibility. 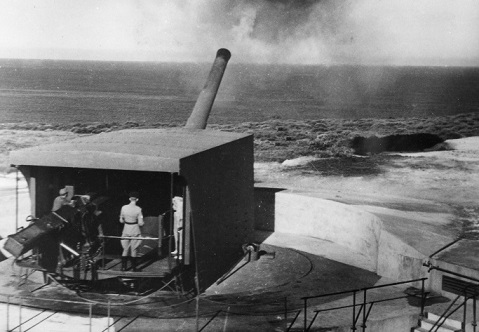 Fig 5.  No. 2 Gun North Head, a 9.2 inch gun, firing to sea.  With a range of 28km (Manly to Palm Beach), these guns were the largest employed in Australia's WW2 coastal defence. 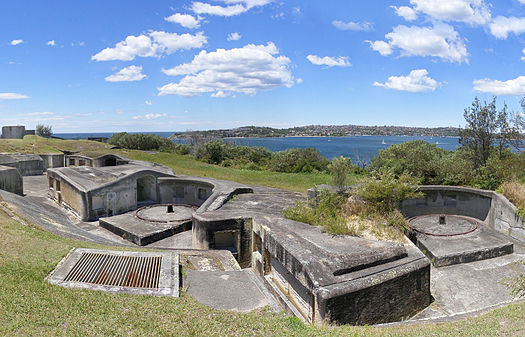 Victoria - HQ Port Phillip Fixed Defences.  Melbourne is at the northern end of Port Phillip Bay and is accessed by a narrow channel running up the eastern side of the bay, so the focus has always been on protecting the entrnace to Port Phillip Bay.  Guns established there were among the earliest of Scratchleys forts. Initially they were manned by 2 Hvy Bde (PMF) and 6 Hvy Bde (Militia);  their Batteries were  4 Hy Bty (PMF) and 119 Hvy Bty (M) at Fort Queenscliff on the western heads. 5 Hvy Bty (PMF) and 118 Hvy Bty (M) manned the Fort Nepean and Fort Pearce guns to the east.  The Batterioes were renamed to correspond with the forts where they were based and the arrival of militia draftees the origina lBatteries were depleted as their men were posted away and they disbanded. Later, personnel from the 5th and 6th (VIC) Bn VDC were posted to man the guns on the western side and from the 5th and 10th (VIC) Bn VDC on the east.  A training Battery of 2 x 6inch guns was installed at Sandringham in Dec 1943 before being stood down in July 1944. 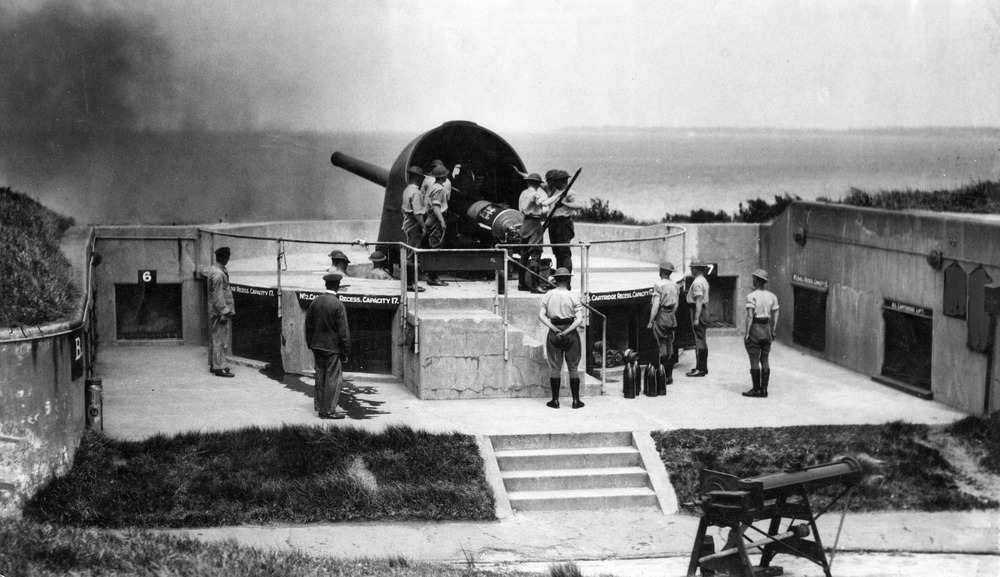 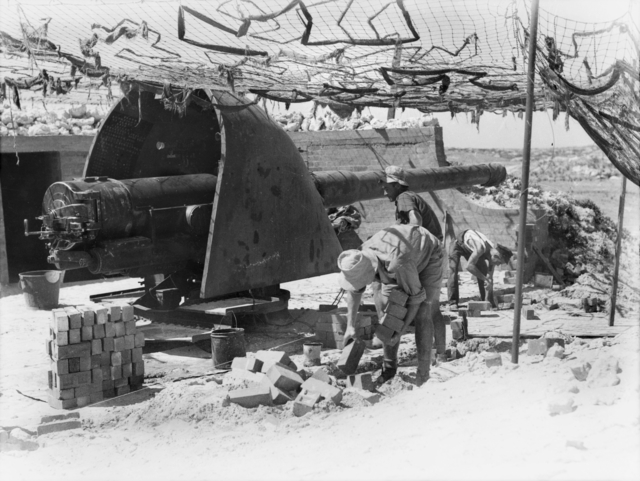 1 Heavy (Hvy) Regiment (Regt) RAA was equipped with 155mm US-sourced guns, normally classified as 'Medium' Artillery but reclassified because they were intended for a Coast Defence role. The Regiment was split to create M, N, O, P and Q Hvy Bty and used to man their mobile 155m guns in Australia and New Guinea.

The 'Letter Batteries' - A/R, B/C, C/F, D, E, F/B, G, H, J, K, L, M , N, O, P, Q, S, T, U, X Batteries. They also had 'Coastal Artillery Search Light' (CASL) Sections attached - which became fully integrated with their supported Battery in due course and tranferred from RAE to RAA.  Most had been disbandeed by Apr 1945 as the need for defence against the Imperial Japanese Navy (IJN) had diminished.

On the outbreak of war the following artillery structures manned coastal defences as shown: