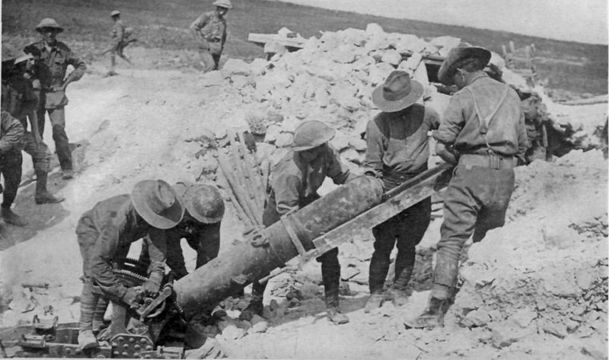 Main Image:  AWM E01448 Image  9.45 inch "Flying Pig" being loaded in a chalk pit near Pozieres in August 1916.  The gun is loaded at a 25 degree angle because of the bulk of the bomb.  It would then be elevated to firing position and fired.

At the start of the First World War, the Trench Mortar did not exist in the British Army.  The Germans had them, where they were known as Minenwerfers, but certainly not in great numbers.

The light trench mortar was the Stokes 3 inch mortar, operated by the Infantry.  It was effectively not much more than a simple tube for a barrel, with a bipod to support it and a steel base plate on which to mount the tube and bear its recoil.  It fired a cylindrical bomb to about 800 yards, although its range improved throughout the war.  These were issued to Light Trench Mortar Batteries, which were attached to each Brigade Headquarters and classified as Infantry weapons.  They were relatively mobile and could be dismantled and packed up in minutes.  The Light Trench Mortar Batteries are separately described.

The second category were the medium mortars, of which there were two main types.  Medium Mortar Batteries were artillery units.

The first was the 2 inch Medium Trench Mortar which fired an 'overbore' bomb.  Overbore means the bomb was greater in diameter than the barrel.  It was fitted into the barrel by means of a cylindrical spigot.  The bomb was described as a ‘toffee apple’ or ‘plum pudding’ bomb, weighing 23kg.  It was a relatively short barrelled weapon and had a heavy elevation and traversing gear mounted directly to the baseplate.  They were notoriously prone to ‘drop-shorts’ (which coincidentally is a derogatory term for gunners).  An interesting characteristic of these mortars is that they could be fitted with a silencer  / suppressor.  These however slowed the rate of fire.

The 6 inch Newton Medium Trench Mortar was a rather bigger device.  Like the Stokes, its barrel was a steel smooth bore tube.  It also had a massive baseplate, but rather than having a bipod, it was supported by three steel wire rope guys that attached the barrel to the baseplate;  two effected traversing and one for elevation.  These made ‘laying’ or aiming the mortar much more complex.  The bomb weighed 21 kg with a range of 1,300m.

And then there were Heavy Mortars; aka “The Flying Pig”.  The 9.5 inch Heavy Trench Mortar literally was a beast.  Derived from a French design (also used by the Americans) it fired a massive fined projectile of 69kg about 2,400m.  The projectile could be seen flying through the air, hence the nickname.  It was ideally suited to pulverizing strong points, pill boxes and dugouts, and was capable of blowing a crater 3.5m deep and 8m wide.

The Heavy Mortars were formed into batteries of four mortars attached to each division (Medium Mortars were organised in batteries of six).   They were designated "V/n” where ‘n’ was the Division Number. From February 1918 they were reorganised and moved from Divisional to Corps Troops.

In action, a heavy timber platform was constructed so as to be embedded in the ground.  The mortar base mounting was secured to this.  The carriage sat on the base and could traverse.  The barrel was mounted on the carriage which allowed the barrel to be elevated and depressed for loading.