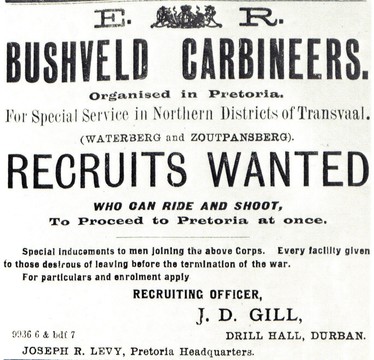 A short-lived multinational irregular unit of the British Army in the Boer War, the Busheveldt Carbineers are immortally associated with Harry "The Breaker" Morant.

It was raised in effect as a counter-guerilla force to fight the Boers at their own game;  hit and run "commando" raids.  And there was no doubting the BVC's capacity to do so.  What got them into trouble was their methods.  There has been much controversy about the tactics and the orders they followed.  Guerilla warfare is by its nature brutal and unrelenting.

Many 'time served' Australians enlisted in the unit.  These were men who had completed their contract of service but elected to stay on when their own contingents returned to Australia.