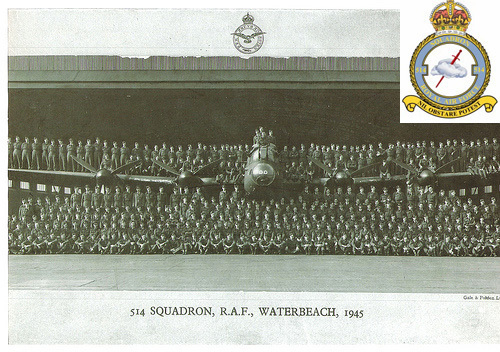 For the purpose of his website, 514 Squadron is included as one of the RAF Squadrons in which Australians served fought and died during WW II.

The Empire Air Training Scheme supplied tens of thousands of aircrew for the Royal Air Force (RAF) air war in Europe during WW II. While a number of so-called Article XV national squadrons were created in Fighter, Bomber and Coastal Commands of the RAF, the majority of Australian aircrew were posted, along with their Commonwealth colleagues, to RAF Squadrons as individual crew members, where they would 'crew up' often with a very multi-national aircrew comprised of men from all over the Commonwealth. Ground staff were similarly assigned.

514 Squadron was first formed at RAF Foulsham, Norfolk on 1 September 1943,equipped with Lancaster Mk.II bombers, as part of No. 3 Group RAF in Bomber Command.

The Mk II Lancaster was unusual in that it was fitted with Bristol Hercules radial engines rather than the more familiar Merlin V12 liquid cooled engines. The Merlin was fitted to the bulk of Lancaster production in the Mk1 and Mk III models. The Hercules engine was not an optimal match with the Lancaster airframe, and the Mk II had generally reduced performance, particularly in respect of its service ceiling, compared to its Merlin engine counter parts.

It was finally disbanded at Waterbeach on 22 August 1945, by which time the squadron had completed 3,675 operational sorties with a loss of 66 aircraft.. (en.wikipedia.org)